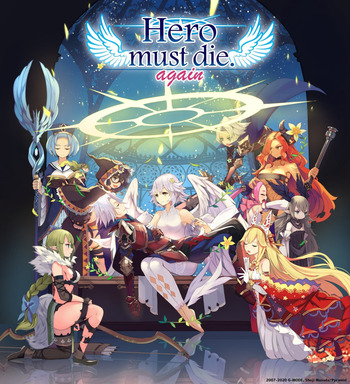 What will you leave behind? note Clockwise from center: The Hero, Julia, Yona, Vivi, Naomi, Veranabelle, Flora, Liu, Sarah, Marianne
"I will defeat the demon Guille, even if it costs me my own life."
— The Hero
Advertisement:

The player takes on the role of the eponymous Hero, and the story begins with the Final Battle against the Big Bad Guille. Ultimately, the battle is won, but at great cost, as the Hero is killed while landing the final blow. In recognition of his deeds that saved the world from Guille, however, the Hero is given one last gift from Heaven: he is allowed five more days to live.

Since Guille's demise doesn't solve all of the problems that plague the land, the player is tasked with helping people, including their allies in the fight against Guille, while searching for their long-lost love and putting their final affairs in order. As time passes, the Hero will grow progressively weaker, forcing the player to rely on the aid of others as their life ebbs away. Finally, at the end of five days, the Hero will pass away, at which point the game ends with a funeral attended by the people the Hero aided in his final days.

No relation with Heroes Must Die.