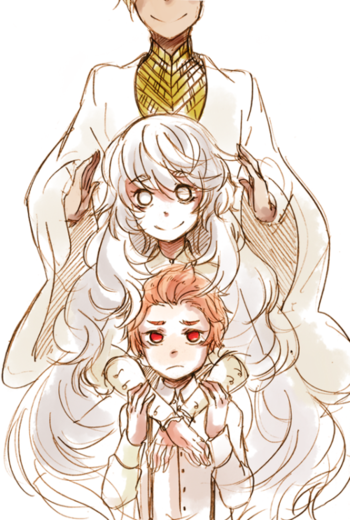 Hello, new Puppeteer! You have been assigned a young puppet named Charlotte Wiltshire: a twelve-year-old girl with a... peculiar home life, living among aliens, demons, a cat turned into a maggot, and sometimes, the mysterious "Umbrella Man". One day, Charlotte herself is tasked with taking care of her gasmasked alien surgeon housemate Huxley's nephew, a disagreeable ten-year-old named Felix. After Charlotte decides to take a small nap, Felix disappears, and the living room's TV screen looks a little different than it did before...

After that day, things change for Charlotte and her household.

. Episode 1 is described by Word Of God as "a surreal horror RPG parody with an Alice-like character in the main role", and Episode 2 as "initially a visual novel parody, made in mostly modernist/post-modern style with Memphis aesthetic". The game has earned a small following due to etherane's surreal Signature Style, its extremely complicated and metaphorical plot, and memorable characters that border on Gray-and-Gray Morality.

Episode 1: Junk Food, Gods and Teddy Bears was released on June 17th, 2015 and can be downloaded for free here

, or as a demo in the game's official Steam page

Episode 2: Requiem Aeternam Deo was released on October 8th, 2016 and can be bought here

, or as the full game on Steam.

Episode 3: Childhood's End was released on January 5, 2018 and can be bought here

Hello Charlotte: Delirium, a very short Spin-Off puzzle game, was released on June 24th, 2017. It can be downloaded here

Heaven's Gate, a very short Spin-Off kinetic novel, was released on September 28th, 2017 and can be downloaded here