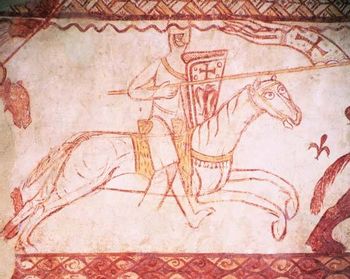 Templar on Horseback, carrying the standard
Non nobis, Domine, non nobis, sed nomini tuo da gloriam.
(Not unto us, O Lord, not unto us, but to thy name give the glory).
Advertisement:

The Poor Fellow-Soldiers of Christ and of the Temple of Solomon a.k.a. The Order of the Temple a.k.a. The Knights Templar were a Christian religious order founded during The Crusades. Despite the title of poor fellow soldiers, the Order eventually became renowned for being the wealthiest Church Militant, especially for its banking prowess. However, they were never quite as rich as they were believed to be.

The Order began in the wake of the First Crusade. The Outremer (Across-the-Sea) conquests gave rise to Crusader Kingdoms in Jerusalem and Acre. The order was founded by its first Grand Master, Hugues de Payens in 1119. Its original membership numbered just nine, Hugues himself and eight of his fellow noble relations. Their stated aim was to protect pilgrims travelling from Europe to the Holy Land and back. Over the course of centuries, this service extended to hospitality and banking; pilgrims could store their wealth with the Templars at one location and withdraw it from Templar coffers at another location later on.

From its very beginning, the Order was controversial. The notion of Christians carrying swords to defend pilgrims for holy purpose raised more than a few eyebrows. It took Bernard de Clairvaux, one of the greatest orators of the age - later the driving force behind the Second Crusade, and believed to be the nephew of one of the original nine - to come to their defence. In his pamphlet, In Defense of the New Knighthood, he argued that Templars could serve the Church and carry swords under the prerogative of Saint Augustine's Just-War theory. Clairvaux noted that, a Templar Knight, "is truly a fearless knight, and secure on every side, for his soul is protected by the armour of faith, just as his body is protected by the armour of steel. He is thus doubly-armed, and need fear neither demons nor men." Thus legitimized, the Templars were able to claim donations from several noblemen and neighbouring Kings across Europe. Each Templar was required to take a vow of chastity and poverty, to forsake all other titles, and to devote himself to the Holy Life and become a Warrior Monk. The Order itself was granted several tracts of land across England, France (the true heart of Templardom), Spain, Portugal, modern day Croatia and Poland, among other places. On the advice of Bernard, Pope Innocent II exempted them from taxes, and conferred upon them full independence from any authority except that of the Pope.

The Templars in Jerusalem claimed the Al-Aqsa mosque as their base of operations, believing that the lost Temple of Solomon was buried beneath it. This association with Solomon and their habit of occupying religious buildings during the Crusades would go on to form the seed of their later legend, as well as provide the Temple of their title. But for the most part, the Templars served as a military order of exceptional versatility. Templars had proper ranks between Knights, Chaplains and Sergeants. The Knights were the elite fighting force, while the Sergeants, also known as brothers, were the poorer recruits. Only Knights, recruited from the noble aristocracy (though in the early days, noble ancestry wasn't necessarily required), wore the iconic Templar regalia of White Surcoat over Chain Mail emblazoned with a Red Cross on its chest. The sergeants, drawn from the lower classes and so the majority, wore black habits and served as infantrymen or servants. Chaplains wore green and were responsible for religious services.

They were famous during the Crusades for their discipline, their refusal to retreat from battle, and their religious devotion. The Templars played a key role in the Third Crusade, thwarting a few victories by Saladin and fighting alongside King Richard I and King Louis VII, but were also considered to be the Spanner in the Works on later crusades, especially the Sixth Crusade. This was because they argued against grand reconquests in the Middle East, as the reconquered land couldn't be held in the long term. They also served with the Spanish and Portuguese monarchs during the Reconquista, though in Iberia, the various monarchs made it very clear who was in charge and preferred to use homegrown Orders such as the Orders of Santiago and Calatrava. The Templars gradually constituted a sort of kingdom unto themselves. They built castles, fortresses, and garrisoned towns. They had a proper organization with a Grand Master, elected for life and based in Jerusalem. Templar territories in various regions were organized into provinces with commanders and preceptors manning these posts, most of whom were appointed by vote. By the mid-1200s, the Templars possessed property across Western Europe, the Mediterranean and the Holy Land. For a time, the Templars "owned" the island of Cyprus, having bought it off Richard the Lionheart after he captured it, but sold it back to him when they realised that it was too much for them to hold. Their military strength, noble vows, and renunciation of titles gave them credibility to collect, store, and transport bullion and other valuables across a wide region. Storehouses holding reserve currency, their general bureaucratic efficiency, and their command of land and sea trade routes made them attractive to bankers and kings, in addition to pilgrims. From this skill with banking and finance arose the association of Templars with treasure, and led to them ultimately entering conspiracy-theory territory.

However, it should also be noted that they were never quite as rich or as powerful as was generally assumed. They frequently occupied key positions in royal courts, effectively running the French treasury (which is part of what led to their fall), but were at the mercy of kings as Philip IV proved during the Trial of the Templars, and as the kings of England proved when they frequently used the Templars as a piggy bank. Further, King Edward I employed them as 'the Hammer of the Scots', as part of his armies during his campaigns in Scotland, forcing the Masters of both the English and Scottish Temples to swear fealty to him. They also had the disadvantage, unlike their colleagues the Hospitallers and the Teutonic Knights, of not having a defined base to call their own, like the Teutons in Prussia and the Hospitallers in Rhodes.

The rise and fall of the Templars, seen in retrospect, is a case of classic Mission Creep. The Order's original purpose was to protect pilgrims, but it gradually expanded to serving as a voluntary Crusader army and peacekeeping force. From there it expanded into infrastructure and finance. This expansion was inversely proportional to the gradual waning of the Crusader mentality in the 1200s, at which point the presence of an organization subsidized by the nobility and the Church, free of any regulation from secular authority, and possessing considerable prestige, raised serious concerns among both the royalty and the Templars' fellow Christian orders. In the wake of the Fourth Crusade - in which the Crusaders sacked the Byzantine Empire instead of the Outremer - and the fall of Acre in 1291, many argued that the Templars no longer had any purpose. In addition, their rival holy order, the Hospitallers, wanted to merge with the Templars in order to access their infrastructure.

By the dawn of the 1300s, the Templars were without a clear purpose, and their failure to attract royal and church aid for another Crusade signalled that the Order was now nothing more than a financial institute. The Templars did appear to entertain hopes of starting an actual kingdom in Languedoc, in imitation of the Teutonic Knights (who set up shop in Prussia) and the Hospitallers (who'd nicked Rhodes), but this in turn merely aroused the further suspicion of King Philip IV of France.

King Philip "le Bel"note The Handsome - He was said to be exceptionally good-looking was a monarch who was interested in reforming finances and centralizing his kingdom under one rule. Like most medieval monarchs, his kingdom teetered on bankruptcy and he was perennially strapped for cash. Initially, Philip IV was friendly with the Templars, having taken hospitality at the Temple Fortress fleeing a riot in Paris. Gradually, the Templars' considerable presence as a "state within a state", papal authority to travel across all borders without any dues or regulation to secular authority, and considerable stores of wealth caught his attention. In addition, Philip IV had claims on Templar territory in Champagne, France and was troubled by their petition to form a Kingdom in Languedoc and later in Cyprus. On top of this, Philip IV was conducting his own campaign to expand royal authority and limit papal authority. He succeeded in deposing Pope Boniface VIII and installing a Frenchman as Pope Clement V, and moving the papacy to Avignon from Rome. This coincided with the King's persecution of the Templars, which ultimately resulted in mass arrests on October 1307, Friday the 13th. Following these arrests, the Templars were accused of blasphemy (worship of a crypto-Muslim and neo-pagan Mystery Cult of Baphomet) and sodomy, tortured into confessions, and finally burned at the stake. Overnight, the nearly 200-year-old organization ceased to function, with Templar initiates lapsing from the Order, joining rival orders, and generally heading for the hills. These arrests ended the role of Church military orders in finance; royal authorities once again became the centers of economy. The downfall of the Templars also became an endpoint for The Crusades, whose enthusiasm had already ebbed. The Templars had been merely The Remnant. The dramatic fall from grace, from Poor Brothers venerated for their devotion to Christ to blasphemers and neo-pagans associated with usury, cemented the Templar legend.

The Knights Templar were skilled, pious, and occasionally highly-educated elite fighters, cavalry, and bankers. The order was, all in all, a fairly normal (if vastly successful until its demise) religious warrior class born from the upper crust of medieval society. Ironically enough, they only embodied the Knight Templar trope in their early days. Within a few decades of their founding they had transformed, in the eyes of their more zealous contemporaries, into a notoriously tolerant organization that cultivated diplomatic contacts with the Muslim world; worked with Arab architects (which influenced the Gothic architecture seen everywhere in Europe), merchants, and even theologians; and disapproved of slaughtering enemies if they agreed to surrender. Indeed, Muslim sources were often more positive about them than Christian ones were, saluting their military skill, religious dedication, cultured nature and good manners (i.e. they weren't intolerant foaming fanatics, unlike many fellow crusaders). All of these points were used against them during the trials staged by Philip IV. The persistence of rumours that the Templars were somehow corrupt despite most evidence to the contrary means the Order is, to this day, an example of heroes with really bad publicity.

The Order ceased to exist effectively overnight.note  Some regional branches, such as the Portuguese one, survived, with the King of Portugal creating the Order of Christ in 1317 for survivors of The Purge. This, and their lingering association with both the Temple of Solomon and a huge treasure trove later gave rise to countless Ancient Conspiracy theories. That many of the Order's members in France were arrested, tortured into giving false confessions, and then burned at the stake on Friday 13th (October 13, 1307, to be precise) is often erroneously cited as the origin of the belief that 13 Is Unlucky. Pope Clement V only officially disbanded the Order in 1312. The last Grandmaster, Jacques de Molay, was burnt at the stake in the year 1314, seven years after his arrest.

Works featuring or referencing historical Templars (or their successors):