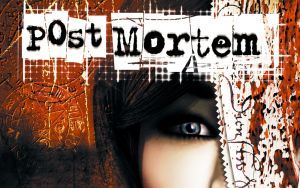 Post Mortem (2002, Microïds) is a murder mystery adventure game for PC. The storyline revolves around a retired American private detective by the name of Gustave MacPherson, who is hired by the dark, mysterious Sophia Blake to track down the person who brutally murdered her sister and brother-in-law in the Orphée Hotel, in the chic District 8 (Paris). The subsequent investigation will lead MacPherson into the heart of the darker side of the city, one of danger, uncertainty and suspicion. The main character suddenly finds himself in a situation where it is unknown whether it is safe to trust anyone, in addition to being faced with a confusing, baffling murder characterized by the unsure personalities of the victims.
Advertisement:

It is part of a trilogy: the title game, Still Life, and Still Life 2.