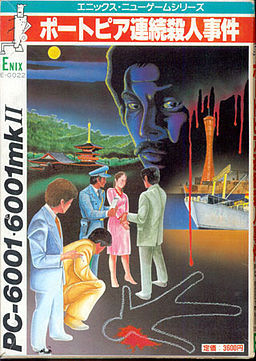 The Portopia Serial Murder Case (ポートピア連続殺人事件 Portopia Renzoku Satsujin Jiken) is an Adventure Game created by Yuji Horii (who then went on to create console RPG trope maker Dragon Quest). Originally released for the NEC PC-6001 computer in 1983 and ported to the Famicom console (with improvements) in 1985. The games puts you in the shoes of an unnamed detective who, together with his partner Yasu, have to solve the murder of a wealthy banker with dark secrets.

While largely unknown in the West, Portopia is considered one of the most influential games of all time in Japan. It is the Trope Maker for Japanese adventure games and the Visual Novel genre. Its success put Enix on the map, allowing them them to create Dragon Quest, and it was a huge inspiration for Metal Gear creator Hideo Kojima.

Ahead of its time in various ways, Portopia is also an Ur-Example of numerous tropes in the context of video games, including the Choice-and-Consequence System, Dialogue Tree, Immersive Sim, Multiple Endings, Point-and-Click Game, Story Branching, Unreliable Narrator, and Wide-Open Sandbox.

A Fan Translation of the game is available here