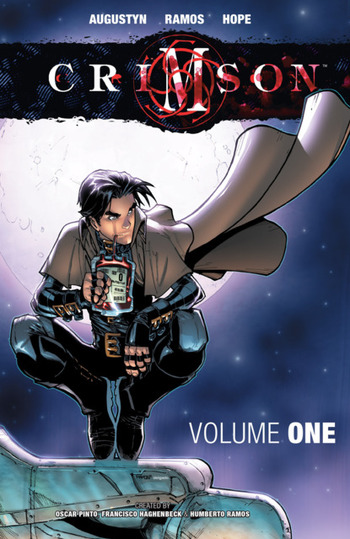 From vampire victim to The Chosen One
Crimson is a 1998 Urban Fantasy comic book written by Bryan Augustyn and drawn by Humberto Ramos, revolving around a problematic teenager named Alex Elder. After running away from home to a party late at night with his friends, he is attacked by the vampire gang known as the Jelly Bats. While his friends are murdered by the gang, Alex is saved by Ekimus, the last of an ancient race pre-dating humanity, although he is bitten and turned into a vampire by the gang leader Rose. Coming to terms with his newfound existence, Alex is drawn to a supernatural world and a millennia-long conflict between good and evil. Alex is believed to be The Chosen One having powers beyond that of a normal vampire and he is fated to bring an end to vampirekind. He will face many obstacles and will be assisted by a colorful cast of allies of different backgrounds to achieve his goal.
Advertisement:

The series was originally published under Image Comics for its first seven issues and the remaining ones were passed over to WildStorm, making it a total of 24 issues. Two special issues were released, one of them detailing Joe's backstory and how he met Scarlet.