Comic Book / Curse of the Mutants 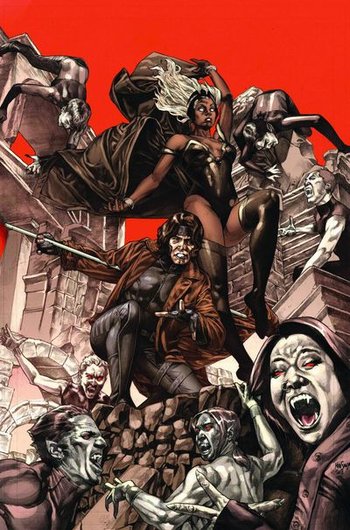 Curse of the Mutants is a 2010 X-Men storyline that spanned across its spin-off titles as well as the Sub-Mariner that pits the mutant superheroes against vampires, taking place in the aftermath of Second Coming where the team had re-located to San Francisco.

When Count Dracula holds a gathering with several vampire clans to discuss current affairs, he is betrayed by his own son Xarus who believes his father is holding down their entire race and conspired with other clans to overthrow him. After beheading and staking Dracula, Xarus devises a cunning plan to eliminate their kind's weakness to sunlight so they can set his eyes on world domination and he chooses the X-Men as his first targets to create a powerful army.

He draws their attention by sending a suicide bomber to explode in Union Square and infecting its inhabitants (including Jubilee (Marvel Comics)) with vampire blood. As they realize their vampire problem, the X-Men enlist the help of Blade, but as their problem worsens and the fact they are fighting an enemy they are not prepared with, their key to survival against their new menace lies on finding and resurrecting Dracula...

This storyline contains examples of the following tropes