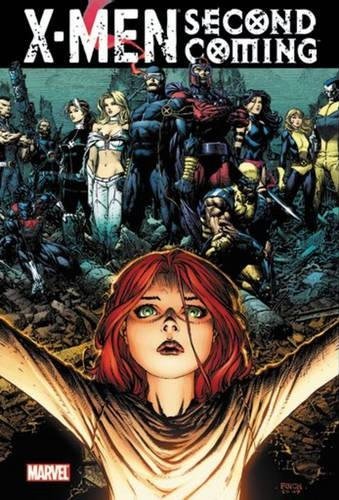 Second Coming is a fourteen part 2010 Marvel Comics X-Men crossover. It was co-written by Craig Kyle, Chris Yost, Matt Fraction, Zeb Wells and Mike Carrey, and ran through the four main X-Men titles at the time (Uncanny, Legacy, New Mutants and X-Force), along with a side-story in X-Factor and the tie-in publications X-Men: Hellbound and Blind Science.
Advertisement:

Since M-Day, mutantkind has been on a low ebb, their numbers brought to less than two hundred by the Scarlet Witch's declaration of "no more Mutants". The X-Men, led by Cyclops, have tried to protect mutantkind as their enemies have tried to take advantage of this to wipe them out for good. Recent events have forced them to the artificial island of Utopia, off the coast of San Francisco, but even with new allies like Magneto, or Namor, every attack risks lowering their numbers further still, loses they cannot afford.

But there is hope, quite literally, in the form of Hope Summers, the first Mutant born since M-Day. Taken into the future by Cable, she now returns a teenager, ready to serve whatever destiny might await her. No-one knows what Hope can do, not even Hope herself, but they know she has to do something. Unfortunately, the X-Men's enemies know about her, and Bastion, foremost of those enemies, has amassed an army with one purpose: Kill Hope, and kill the X-Men.

This crossover contains examples of: