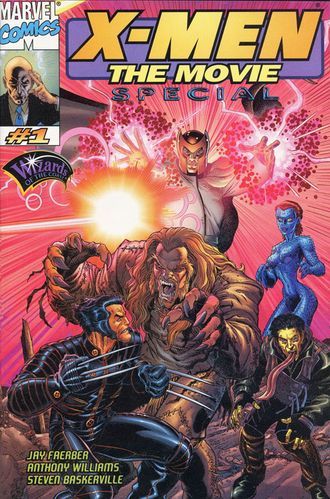 X-Men: The Movie Special is a one-shot comic released as a tie-in with Marvel Comics and Wizards of the Coast's X-Men Trading Card Game. It featured cover art by Art Adams, a story by Jay Faerber and pencils by Anthony Williams (who also drew X-Men's comic book adaptation the same year).

The comic serves as a sequel to the 2000's X-Men. Set sometime after the Liberty Island incident, it begins with the X-Men battling the Brotherhood of Evil Mutants. Wolverine and Rogue fight Sabretooth in California, while Cyclops, Jean and Storm go and tangle with Mystique and Toad in New York City. After two lengthy battles, the villains are defeated and the day is saved.

But as it turns out, this was all a distraction by Magneto to keep the X-Men busy while he and three new mutant followers he calls the Acolytes go and see a boy named Malcolm. Malcolm is a young mutant, and Magneto is attempting to pour a honeyed potion in his ear to have him join the Brotherhood. Professor Xavier, having seen through Magneto's plan, shows up to offer Malcolm an alternative to Magneto's bleak world outlook. Magneto tells his newest underlings to deal with the Professor... but Xavier didn't come alone, having brought three new X-Men, Colossus, Angel and Psylocke, and thus a battle begins to determine the fate of Malcolm.

For obvious reasons, the comic's plot was rendered completely non-canon by the release of X2: X-Men United, but it remains an interesting "what-if" story, particularly for its depiction of Rogue, Angel, Colossus and Psylocke in the movie versions of the X-Men costumes.

As a bonus, the comic included sections covering the development of the Trading Card Game, and included production artwork of characters intended to appear in it. And since the card game was based around the movie, this means the bonus material shows characters such as Beast and Marrow in movie-themed X-Men uniforms.

Tropes used in this comic: