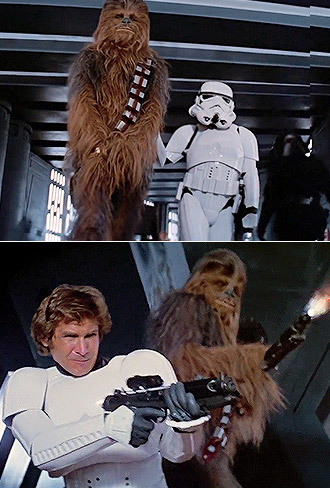 Perhaps you need to smuggle some recognizable people into a base, or smuggle some friends out of a hostile situation. Perhaps the two of you have just been caught by your enemies, and are trying a bluff. Time for the Trojan Prisoner trick.

In the simple version, some of the protagonists pretend to be enemy mooks, with the others posing as their prisoners or slaves. Quite often, the main hero gets to play the captive, being the most recognisable, but if the mooks have face-concealing outfits, it's the least recognisable member of the group who gets tied up.

In the other version, the fake guard is someone the enemy thinks is on their side, e.g The Mole, a reformed villain, or a Loveable Rogue. They swagger into the enemy camp, show off their captive, then surreptitiously help them escape, while doing a little espionage on the side. The fake guard doesn't always bother telling the hero the plan in advance either; the act is much more convincing if the hero thinks it's real.

This can be used to play up the relationship between the characters, allowing the captor to temporarily treat the captives like dirt, or to express cruel opinions that hit a bit too close to the truth. If the disguise relies upon actually restricting the captives significantly, this can play off characters' mistrust of the fake captor, especially one who is very close to the enemy. However, it's pretty rare for the fake captivity to become real.

Occasionally, this trick is proposed offscreen, leading the viewer to think that a major character pulled a Face–Heel Turn (who is, in truth, a Fake Defector).

If they are physically bound, this can lead to a Chained Heat or fighting With My Hands Tied. Compare I Surrender, Suckers, Captured on Purpose, where the heroes surrender openly or let themselves be legitimately captured, and cases where anyone should be able to see through it overlap with The Guards Must Be Crazy. The Play-Along Prisoner may allow themselves to be tortured before breaking loose. Compare Sheep in Wolf's Clothing, where this applies to The Virus, and with Trojan Horse, which also gets the hero into an enemy base, but without them knowing anyone has crossed their lines. Compare Bavarian Fire Drill, which relies on bluffing rather than a convincing disguise. Contrast Disguised Hostage Gambit, where real villains with real hostages dress the hostages up as villains to fool The Cavalry.

Alex pretends to have captured Kate and Sawyer to help them ambush a guard imprisoning her boyfriend Karl, while Sawyer references the trope's use in Star Wars.

Alex pretends to have captured Kate and Sawyer to help them ambush a guard imprisoning her boyfriend Karl, while Sawyer references the trope's use in Star Wars.