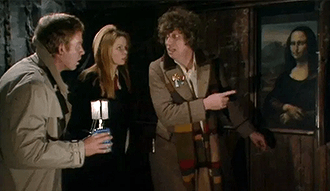 "Hey, anyone know who this lady is?"
"You're a beautiful woman... probably."
— The Doctor, failing to respond to the Countess as planned
Advertisement:

The one where Doctor Who meets Carmen Sandiego.

Written by Douglas Adams, Graham Williams, and David Fisher (under the pseudonym David Agnew). This four-episode serial first aired from September 29 to October 20, 1979.

The Doctor and Romana II go on a holiday in Paris, and soon find themselves accidentally investigating a fracture in time. They meet up with a very confused detective named Duggan, whose job up until now had mostly involved divorce cases, and who plans on solving the mystery of the day by punching things. While the Doctor and Romana merrily confuse him even more, they all get captured by a local rich guy named Count Scarlioni.

Scarlioni turns out to be an alien who's having a bit of trouble with his spaceship. He also owns six copies of The Mona Lisa. All of which appear to be authentic. Oh, and the original is still hanging in the Louvre. Fed up with having to cater to Scarlioni's zany schemes, the Doctor just walks back to his TARDIS, vworps over to Italy and plans to ask Leonardo da Vinci himself what's going on. But his old friend isn't at home, and instead, another version of Count Scarlioni greets the Doctor in Leonardo's house.

The six Mona Lisas (Monas Lisa? Monae Lisae?) are all Count Scarlioni's legit property, who (as if all the Monas weren't enough) has a scanner for recording the Louvre security system, cleverly disguised as a bracelet on his wife's wrist. The wife, however, isn't aware that her husband is an alien, and gets the shock of her life when he takes off his mask and reveals a face full of writhing green tentacles. He's actually Scaroth, last of the warlike Jagaroth. As it turns out, when his spaceship exploded at the dawn of Earth time, his consciousness was scattered throughout history. His plan revolves around reuniting all of his selves.

All six paintings are original Mona Lisas, all painted by Leonardo da Vinci in the sixteenth century. Scarlioni intends to steal the one in the Louvre and then carefully sell each of the Monae to a different private collection. The proceeds will fund Scarlioni's time travel to prevent the crash from ever occurring. Romana, carrying the Idiot Ball of the day, helps him out a bit.

The Doctor doesn't especially mind all that... until he discovers that the crash of Scarlioni's spaceship was the "spark" that kicked off the development of life on Earth. Now they must work out how to defeat a being who's had four hundred million years to plan his escape. Eventually, Duggan solves the whole thing by just punching Scarlioni really hard in the face. Humanity saved!

As if all that weren't enough, John Cleese and Eleanor Bron have cameos.

This story was the first one filmed outside of Britain and Tom Baker has commented that it was a bit startling to do shooting without the crew having to hold back throngs of fans, since Doctor Who hadn't been exported to France, at this point. It also has the distinction of being the most-watched Doctor Who story to date, with a peak of 16.1 million viewers for the final episode, although this becomes a bit less impressive when you learn that ITV, then the only other major channel in the country, was off-air at the time due to a strike.

It was never adapted in the Target Doctor Who Novelisations range because of rights issues surrounding its complicated authorship, Douglas Adams' existing contract with his own publisher, and the question of money. It finally got one

in May 2015, with an abridged, Target-style reissue (complete with a new cover)

in April of 2018, alongside a slate of New Who novelizations.

"City of Death" was the first Doctor Who story to feature location filming outside the UK, and it takes full advantage of this, featuring extensive shots of the Doctor and Romana wandering the streets of Paris. The results were so acclaimed (even if the story itself needed to be vindicated by history) that the production staff attempted to repeat the gimmick for the scrapped story "Shada" (in Cambridge) and "The Two Doctors" (in Spain).

"City of Death" was the first Doctor Who story to feature location filming outside the UK, and it takes full advantage of this, featuring extensive shots of the Doctor and Romana wandering the streets of Paris. The results were so acclaimed (even if the story itself needed to be vindicated by history) that the production staff attempted to repeat the gimmick for the scrapped story "Shada" (in Cambridge) and "The Two Doctors" (in Spain).