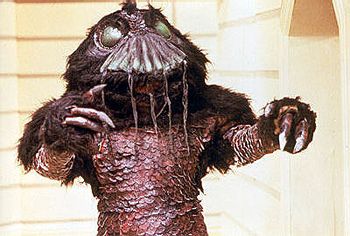 The one that would make Ronald Reagan shed a tear.

Written by Bob Baker. This four-episode serial first aired from November 24 to December 15, 1979.

The Doctor and Romana arrive on a space liner orbiting the planet Azure. The liner has just been impaled by a private spacecraft due to an accident leaving hyperspace. To be more precise, the accident happened because the navigator of the liner was stoned out of his mind on a horribly addictive illegal drug called vraxoin, and it appears somebody onboard the liner is smuggling it.

A biologist named Tryst, travelling aboard the liner, is carrying a machine of his invention that keeps samples of alien ecosystems in pocket universes for observation. The effects of the hyperspace Telefrag cause a group of monstrous predatory beasts called Mandrels, from the misleadingly named ecosystem of Eden, to escape the invention and start slicing people up.

The Doctor and Romana are further endangered when the brutal and stupid local border guards assume that the Doctor is a drug-dealer, because he was carrying some vraxoin he discovered around as evidence. Also, the captain of the liner gets drugged and spends the rest of the story as a desperate vraxoin addict.

Eventually, the Doctor manages to separate the two ships, with help from the TARDIS's systems. The drug-smugglers turn out to be Tryst and Dymond, the owner of the smaller ship. It turns out that vraxoin is made from decomposed Mandrel corpses, which was why Tryst was keeping them in his hi-tech zoo. The Doctor decides to return the Mandrels and the other specimens to their original planets.

The director walked out of this one after many fights with Tom Baker, leaving the producer Graham Williams to finish the story off. Can you tell?