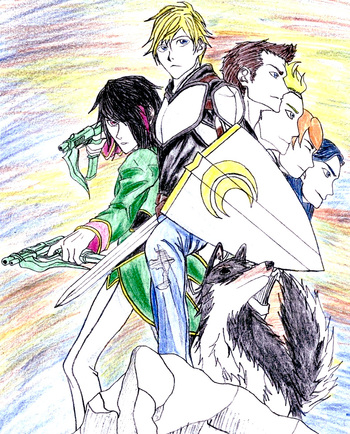 Once upon a time, during a normal lunch period at Beacon Academy, Ozpin springs a surprise on his students: A boys vs girls civil war. The battle will start right after the announcement, last for a week, and whichever side controls the most capture points by the end wins some prize money to re-decorate their dorms. With Coco Adel (who brought her minigun-purse with her to the cafeteria) convinced by the prospect of extra fashion money and Pyrrha convinced by the prospect of ... private time... with Jaune, the girls manage to capture the cafeteria in a landslide victory. The boys are reduced to scattered survivors around the school, but they do have a few tricks up their sleeve:
Advertisement:

One, Zwei the dog, who is very happy to assist his fellow males, even those of different species. Two, Jaune Arc, an incredible leader who can rally the boys, snatch victory from the jaws of defeat, and even convince Cardin to take a level in kindness. Or maybe he's just a cowardly idiot who is forced into the role of leadership and carefully herded by fate into the line of fire, upon which his desperate scrambling to stay alive is mistaken for awesomeness. Or maybe it's a bit of both. Either way, Jaune's memoir reveals a side of the conflict that no one ever thought of.

That's the gist of The Beacon Civil War, a tale blatantly inspired by Ciaphas Cain. Written by Coeur Al'Aran, it can be found here