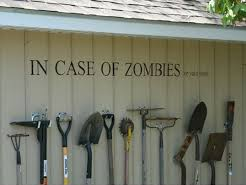 "Maw! Them zombies dun' got in the cornfield agin!"
"Hobgoblins are best left alone. They sharpen their farm implements far more than is necessary for their work in the fields."
—Hearthfire Hobgoblin

Let's say you're not one for fancy weaponry, or you're in a life-threatening situation without a knife or gun in sight. What do you do? Why, raid the tool shed, of course!

Gardening Variety Weapon is when a character (not necessarily incompetent with more traditional weapons) turns a mundane garden tool into a competent weapon.

Truth in Television in that many ancient weapons such as the flail and Nunchaku were essentially retooled farming implements.

A subtrope of Weapon of Choice, Improbable Weapon User, and frequently, Improvised Weapon. Supertrope of Shovel Strike, Machete Mayhem, Kukris Are Kool, Sinister Scythe, An Axe to Grind (when it's a woodchopping axe and not a battle axe), Shear Menace (when gardening shears are used), half of both Torches and Pitchforks and Weapons of Their Trade. Often used in Martial Arts and Crafts if the craft is gardening.