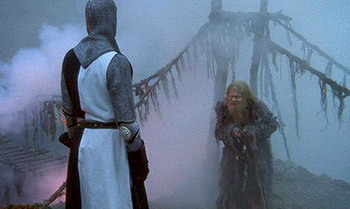 The Hero and his companions are on a quest to find a MacGuffin, stop the Big Bad, and Save the World. In order to get to the MacGuffin Location, they have to cross a bridge. But wait, there's someone guarding the bridge, and they won't let The Hero past until they pass a test.

Usually a troll of one kind or another, these bridgekeepers more often than not demand that anyone who wants to cross has to answer a riddle.

Related to Riddle of the Sphinx. Compare Only Smart People May Pass and Only the Worthy May Pass.