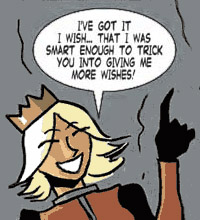 Princess Christi is quite savvy when it comes to genies.
Advertisement:

The Princess Planet is a hilariously outrageous world where just about every girl is a princess and mix-and-match monsters frolic amongst spaceships and robots.

This Webcomic, created by Brian McLachlan is best described as a Fractured Fairy Tale meets Space Opera with a dash of The Far Side.

The heroine, Princess Christi, is bored with life in the royal family, so she abandons her life of comfort for adventures outwitting opponents with Bugs Bunny-like logic.

This tall blonde wants to be an adventure heroine.

The comic concluded in July 2013 after eight and half years.

The Princess Planet provides examples of the following tropes: