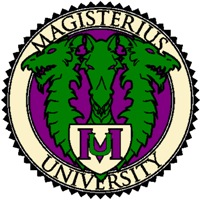 "The way I heard it, the founders felt that being forced to kill random monsters would somehow give the students a valuable experience...you know, help us build character? How getting into fights is supposed to make somebody a better sorcerer or bard is beyond me..."
— Steff
Advertisement:

The story revolves around the life of Mackenzie "Mack" Blaise, a self-hating half-demon student at Magisterius University, a college of enchantment in an alternate universe where Dungeons & Dragons-style fantasy and magic exist in place of modern technology. While not quite a deconstruction, it makes frequent joking allusions to common tropes of fantasy gaming.

At least for the first half or so of the first year's chapters, the story frequently veers off into sexual territory, arguably at the expense of the plot, but usually by offering a different take on a difficult or sensitive topic. For instance, the second book offered Mackenzie's attempt to describe in first-person narrative her first orgasm, without her realizing that's what she was having. As the story progresses, the sexual content becomes much less frequent, but when it shows up, it does so with gusto.

Chapter 496, plus a number of side stories, concluded Mack's first year at MU. The second year has reset the chapter numbering; so far, 338 chapters of the second year have been released, along with more side stories. Specific chapters will be referred to with the Y__-__ format; first blank is the year, second is the chapter number. Though there has been no official word on the story being over, it has not been updated since February 2017.

The story can be found here.

Definitely Not Safe for Work! Also not related to the other MU college.