Tales of Elethiya - The Seven Kingdoms is for fans of fairy tales and romance, Once Upon a Time, urban fantasy, and for anyone who always knew there was magic in the ground at the Disney theme parks. Set in the heart of Orlando, the story weaves a trail through the past and present, the world around us and the magical realms.
— Promotional blurb 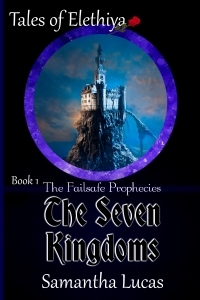 Tales of Elethiya is a serialized Urban Fantasy Fairy Tale by Samantha Lucas. Its first ten book season is entitled The Seven Kingdoms wherein a select group, including humans and other supernatural races, declare a quest to rescue the missing princesses of The Great Marrow.

The story opens when a pair of shifters are summoned to the rescue when the roahn-ami attack two of the seven princesses. As the morning breaks, Wraithe, an immortal protector of the human realms, is found in his own kingdom, an amusement park known to the world as The Magical Marrow. Built from a vision, this act began a chain of events that ultimately ended his close friendship with the one and only Walt Disney. A moment in time that has wracked our hero with grief, leaving him a pale imitation of his former self.

He's told that it appears five of the princesses were taken. All that remain are Fa Zhen, though she remains deeply scarred by the attack, and Princess Bala Strong, married to Luxe, Prince of the land known as Bella Sol.

Wraithe summons a council of nay-chi and serahn and tries to make them understand that it is crucial they put aside their differences and work together, not only to rescue the royals, but to reinstate them to power in their own realms so they can banish the ever present dark before it can encompass Earth.

The ten books tell the stories of this noble, and sometimes misguided group of heroes, each dealing with their own baggage, fears, and beliefs as they try to find and rescue the missing women.

The series is currently inaccessible as the author's website is offline. The last accessible version

shows only three of the books were completed.