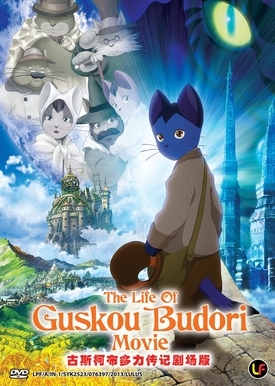 The Life of Guskou Budori (Guskou Budori no Denki) is a 2012 anime movie directed by Gisaburou Sugii, based on the Japanese fairy tale of the same name by Kenji Miyazawa. It is also an earlier and more obscure 1994 movie adaptation of the same Miyazawa story by Bandai Visual, though this page is primarily not about that one. The 2012 remake turns the humans into cats, with the same designs as in Night on the Galactic Railroad, an earlier work based on another Miyazawa fairy tale by the same director.

Guskou is a cat who lives in the Tohoku forests in northeastern Japan in the 1920s. A series of droughts and natural disasters forces Guskou to leave home and search for a new place to live.

He soon falls in with a group of scientists at the Ihatov Volcano Department and discovers that they are dealing with the same natural disasters that have altered Guskou’s life.