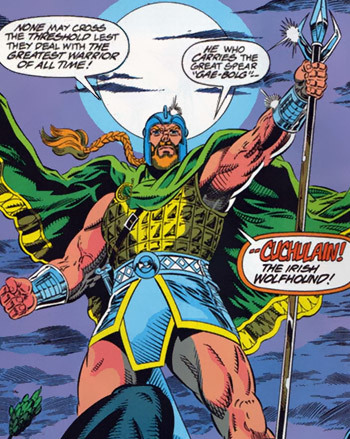 A figure or event that tests the resolve of a hero as he pursues his destiny and/or his goal. The Guardian is not necessarily adversarial, but puts the hero in a position where he must make a decision that reflects a sincere commitment to the task at hand, by providing a threat or bar to progress that the hero must specifically choose to overcome. In simpler terms, the Threshold Guardian exists to make sure the Hero is prepared for his adventure.

Sometimes the Guardian's challenge is an illusion which must be penetrated; when it is not, the Guardian himself is often the challenge, and defeating him can turn him into an ally. Whatever form the Guardian and his challenge take, their defeat forces the hero to grow; heroes that are not yet ready for their journey are forced to turn back until they have matured sufficiently to handle the task.

Physical force is not necessarily the solution. Outwitting the guardian or persuading them to your side may, in fact, be required.

A hero may have more than one encounter with Threshold Guardians during his adventure — each one tests him and at the same time heralds an escalation of the danger (and consequent reward) the hero faces.

The term comes from the work of comparative mythologist Joseph Campbell — next, the hero Can't Refuse the Call Anymore.

In the work of Vladimir Propp, this character is the donor, laying more emphasis on the benefits gain than the testing to get them.

Compare with Secret Test of Character, in which the obstacle put before the character is a moral one. Although this can shade into that, when the guardian is testing courage, perservance, willingness to listen to advice, or courtesy. Also compare with Red Pill, Blue Pill, which is a similar event meant to test the hero's willingness to embark on his adventure in the first place.

In Video Games, these guys may be responsible for a Broken Bridge. Also, compare Beef Gate, which is more on the game mechanics side of things than the more plot-centric Threshold Guardians.

A guardian challenging an Anti-Hero may provide them with the opportunity to prove their willingness to perform morally questionable or outright evil acts, such as sacrificing others.