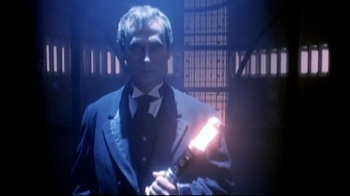 He is lethal with that cane.

G'Kar is in the Zocalo trying to persuade an apathetic crowd that the Centauri will eventually set their sights on everyone else's worlds while Delenn meets with Kosh. He has concerns and has summoned an inquisitor to make sure she is worthy of her great calling.

When she explains it to Sheridan he is not quite sure what to make of it, but is willing to go along if the Vorlons have concerns.

G'Kar meets with a man named Chase to arrange the purchase of weapons for an underground resistance. The price is too high, even with a discount, but G'Kar agrees to it. Before Chase leaves, G'Kar gives him a dire warning:

G'Kar: The money to buy these weapons comes from the life savings of those Narn who were able to escape the Centauri occupation. It is a limited resource, purchased with blood. If it should be squandered, or stolen, be assured that while your body might one day be found, it could never be identified from what's left.

The jumpgate activates and a Vorlon transport comes through. In the docking bay, Sheridan waits as the inquisitor, who turns out to be a human wearing old-fashioned clothes and speaking with a British accent, approaches simply saying, "I believe I am expected."

As Sheridan escorts him through the station, he presses him for information, but gets little other than a name, Sebastian of 14B Heresford Lane in London, and disdainful commentary on what he sees. Sebastian insists he be allowed to do what he came to do or allowed to leave. Sheridan grudgingly submits.

Meanwhile, Garibaldi has gotten wind of G'Kar's arms deal, and confronts him about it. G'Kar doesn't deny it, which Garibaldi appreciates, but still wants them off the station. In return for not trying to lie about it, Garibaldi gives G'Kar a contact of his who might be able to help them out, solving both their problems by delivering the arms through another route.

Delenn hesitantly makes her way to where Sebastian is waiting, where she is presented with a pair of large bracelets which she is told to put on. She can remove them at any time, but if she does she will admit defeat and fail the test. She puts them on and Sebastian appears, circling her like a predator, and asking, "Who are you?"

Confused, Delenn tries to answer, name, position, family, but Sebastian is not satisfied with any of those and expresses his displeasure with a painful jolt from the bracelets. He begins berating and mocking her for her view that she has an important part in what will happen, and tormenting her with ever increasing levels of pain, seeming determined to break down this notion that she is on a divinely appointed mission, even if it kills her.

Vir ducks into a transport tube to escape another of Londo's supplicants, not noticing G'Kar already in there. After enduring the Narn's piercing stare for several uncomfortable seconds, Vir tries to apologize that he wasn't able to stop any of this. G'Kar is unresponsive until the tube opens and he walks out, then turns and draws a knife. He slices his hand then holds it up for Vir to see as blood drops fall down, one by one.

In their dark corner of the station Sebastian begins mocking Delenn's sense of destiny. She claims that everyone has a destiny, but some, like Sebastian, try to keep others from seeing theirs. Sebastian sarcastically tells her to call out (with some urging from the manacles) to see if the Universe responds, and relishes the following silence.

He begins asking her why she is there, trying to down her reasoning that she is meant to be there, even when the world says otherwise. When he points out that the others may well be right, she admits she does consider that sometimes. Taken aback, Sebastian allows her some time to rest.

G'Kar is speaking with a gathering of Narns, outlining his plans, but they are beginning to lose faith. They don't doubt his intentions, just his capability. They want some sign that he can make shipments through the Centauri lines. One in particular, asks for some word from his family, which G'Kar promises to deliver, or step aside.

Delenn is exhausted and frustrated and in pain as Sebastian continues berating her. She begins to point out some of his own deficiencies, much to his annoyance, and he activates the bracelets, bringing her to her knees, but still not admitting that she is unworthy.

G'Kar comes to Sheridan and asks for his help in finding the family. After he leaves, Sheridan decides that it would be better to keep him where he is, rather than have the local Narns put in an unknown. He has Garibaldi tell the Rangers to find them and get a message.

Back in downbelow, Lennier comes to check on Delenn and finds her collapsed on the floor. He tries to get her out, but she insists he go before Sebastian comes back. He immediately goes to find Sheridan, since he's the only one who can defy Kosh and get away with it, and tells him he thinks Sebastian is killing her.

Lennier may not be too far off, as Sebastian has turned the power up to the highest level yet, leaving Delenn nearly comatose on the ground. He looks down at her, commenting on how her entire life has led to this point, doomed from birth. He stops as he hears the door open, and Sheridan comes in and demands she be let go. Sebastian knocks him across the room with his cane and says, "Your turn now."

A while later Sheridan is tied to the wall, as Sebastian begins to question him, Demanding to know how far Sheridan is willing to go, how much he'll sacrifice. Sheridan refuses to answer and Sebastian starts using his cane to hit him with some kind of energy field, which becomes more and more intense until Delenn shouts, "Enough!"

She insists that if he take anyone, he take her. He seems surprised that she would put herself on the line for just one other, and asks about her great cause. She responds that if she falls another will take her place, "This body is only a shell. You cannot touch me, you cannot harm me. I am not afraid."

Sebastian waves his cane and vanishes, and the two of them are released. They hug each other, though they're not quite sure what just happened, and then Sebastian appears at the door. He tells them they can go, they passed.

Sebastian: How do you know the chosen ones? No greater love hath a man than he lay down his life for his friend. Not for millions, not for glory, not for fame... for one person. In the dark. Where no one will ever know or see. I've been in the service of the Vorlons for centuries, looking... Diogenes with his lamp looking for a man willing to die for all the wrong reasons. At last, my job is finished. Yours is just beginning. When the darkness comes, know this: You are the right people, in the right place, at the right time.

Later, Sheridan is waiting for the Vorlon ship to leave, when he asks Ivanova to look up the name, date and address Sebastian gave earlier.

The Rangers have come through, and gotten the requested message, and G'Kar has cemented his position among the Narns on station.

In the docking bay Sheridan comes to speak with Sebastian one more time before he leaves. He presents the information Ivanova found, especially the fact that Sebastian disappeared on November 11th, 1888, after the last of a string of murders in the East End of London.

Sebastian begins to talk of what he did, how he felt the city needed to be taught a lesson, and pulled away from its course of immorality. When the Vorlons found him and showed him what he'd done he wept in despair. He turns to leave with a parting comment: