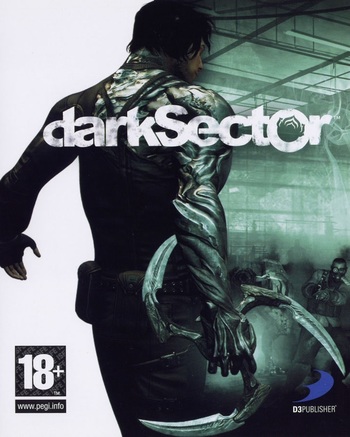 darkSector is a Third-Person Shooter developed by Digital Extremes, and released for PS3 and Xbox 360 on March 25th, 2008, with a PC version following exactly a year later.

You play as Hayden Tenno, an operative for an unnamed American intelligence agency. He is sent to the fictional Soviet nation of Lasria to gather information on a mysterious epidemic. Of course Hayden has a Dark and Troubled Past, and is angsting about his current assignment, afraid of being infected or reliving his past misdeeds. Obviously, The Virus is on hand to give him superpowers (as viruses that infect the protagonist are prone to doing).

Gameplay revolves around Hayden using normal weapons and his infected powers to confront enemies: other infected and the Lasrian army trying to contain the infection. Hayden's most important (and gameplay impressive) power is the use of the Glaive, a sort of three pronged ninja star he can use to do pretty much anything Xena can do with her Chakram. Gameplay also includes taking over Lasrian military hardware and turning it against them and some minor physical puzzles that can be solved using Hayden's powers.