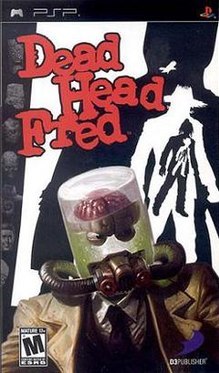 Dead Head Fred is a horror-themed 3rd-person action/adventure game for the PlayStation Portable by Vicious Cycle Software in 2007.

Set in 1940's style film-noir (gangsters, fine suits, and evil mob-bosses... mixed with zombies, radioactive mutants, and cursed statues), the plot follows recently deceased Private Investigator Fred Neuman (a no-nonsense badass with a penchant for violence and fine suits) as he explores Hope Falls, New Jersey on a quest to track down his killers, solve his last contact's case for him—which led him to the decaying city in the first place—and above all, find his missing head.

The game's unique point is that Fred fights, explores, and socializes with a variety of skills and biological weapons from switching the head on his shoulders, up to 9 different types. That aside, the plot, and most notably the voice acting, is filled to the brim with the darkest, grossest humour you will probably ever see in a PSP game—bonus points to the former's extremely lax and extremely casual approach to death.