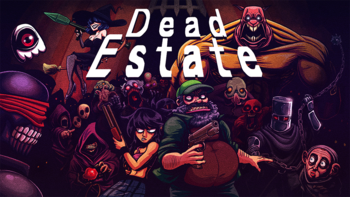 Cornered with nowhere else to turn, can you escape the monster-filled mansion?
Advertisement:

Dead Estate is a Roguelite with strong Horror influences developed by Milkbar Lads and published by 2 Left Thumbs. It was released on October 19th 2021 for PC via Steam and itch.io.

After their truck breaks down in the middle of nowhere, late-night trucker Jeff and hitchhiker Jules find themselves in the middle of a huge zombie attack! Their only respite is a foreboding dark mansion teeming with horrors and something far, far worse... Can they fight their way out of the Dead Estate?