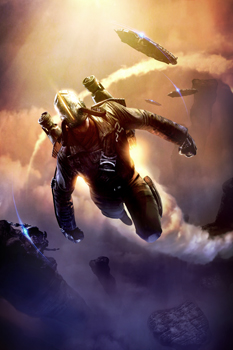 Rise Up.
"Dark Void's only new idea was the ability to seamlessly switch at any time between old-fashioned, ploddy tortoise cover-based shooting on the ground and rocket pack whoosh crikey fun. And you know what? That could be enough."
—Yahtzee's review

Dark Void is a 2010 game developed by Airtight Games and published by Capcom for PS3, Xbox 360 and PC.

The game begins in 1938, with ex-military pilot William Augustus Grey and his former lover Ava making a cargo run from America to Europe, when their plane loses power and crashes over the Bermuda Triangle. They awaken in a bizarre alternate dimension, known as the Void. They soon meet up with the Survivors, a human resistance movement that is fighting the attacks of a strange reptilian race known as the Watchers and their robotic army.

Apparently, the Watchers fashion themselves as gods, ruling over the less advanced humans after they destroyed their own home planet before primitive man eventually rose against them and banished them to the Void. Soon, Will and Ava meet up with Nikola Tesla, who has also found himself trapped in the Void. He equips them with hoverpacks, and Will eventually gets a true jetpack. He takes to the skies, to stop the Watchers before they return to Earth, taking advantage of the coming conflict. There's something else going on, and Ava knows more than she's telling...

The game is notable for seamlessly integrating third-person over-the-shoulder cover-based gunplay with jetpack dogfights, and has the unique feature of "vertical cover". It's also one of Yahtzee's "Branston Pickles" — flawed, but unique and entertaining despite those flaws. So try it anyway.

was announced as a joke, but eventually surfaced into an entirely new game.