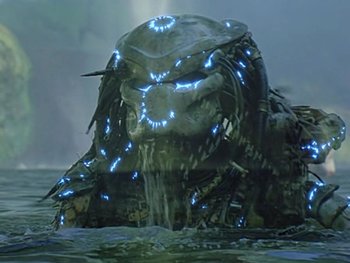 The trope has the requirement that the flicker is in-universe even if nobody sees it. The most common form is when the invisible object gets hurt, is physically contacted in some way, or launches an attack itself. In action sequences, this often happens just before the invisible object does something awesome. Many times, it is also used as a form of balance. While this usage is especially common in games where it would be unfair for one party to be indefinitely invisible, it can also be seen in other mediums with handwaves such as the need to draw power away from the cloaking device to power the weapons.

See also Visible Invisibility. This is another method to See the Invisible.