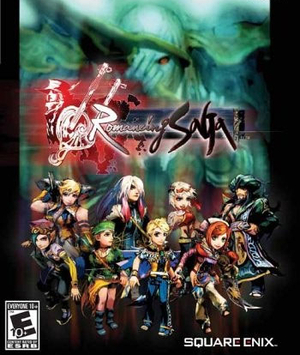 Mardias: a world created by the god Marda, and governed by many, many gods. However, long ago, the balance was torn apart when three evil gods — Saruin, Death, and Schirach — turned against the others, including the lord of all gods, Elore. In the end, Death and Schirach were stripped of their powers, while Saruin was imprisoned through the power of the ten Fatestones, along with the hero Mirsa making the ultimate sacrifice.

A thousand years have passed since then, the Fatestones scattered throughout Mardias. Ample time for the forces of evil to regroup. And now, across the world, eight adventurers are about to embark on their own journeys, each for their own reasons:

Then there's the mysterious Minstrel that shows up wherever they travel, several other adventurers that flit in and out of their lives — from simple mercenaries to travelers and soldiers with thier own histories and stories to tell — and the festering evil that's bubbling to the surface... And, of course, the players themselves, who chooses how to weave all these threads together and determines how their tales unfold...

It eventually got two sequels for the Super Famicom, and was remade for the PS2 in 2005 as Romancing SaGa: Minstrel Song. The subtitle was dropped for release in the West, which had never before seen a Romancing SaGa title in the first place. An Updated Re-release of Minstrel Song for PlayStations 4 and 5, Nintendo Switch, PC, and mobile has been announced to release in winter 2022.