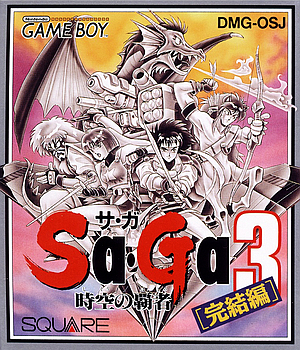 The Pureland water entity appeared and flooded the world's present, past, and future. The water brought monsters, which hunted people day and night. Cities fell one by one, covered by the sea. However, a few individuals prepare for a journey that may determine the fate of the world.
Advertisement:

An enhanced remake for the Nintendo DS was released in 2011, titled SaGa 3: Jikuu no Hasha: Shadow or Light. As with the remake of SaGa 2, the chances of an official U.S. English release are slim to none due to the poor sales of other games in the series.