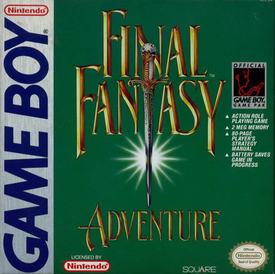 The world is facing dark times, to say the least.

The Dark Lord's empire has near-total control of the world, he's only searching for the Tree of Mana to complete his dominance of the world, and the protectors of the tree and the Mana Tribe devoted to it, the Gemma Knights, are nowhere to be found. It seems that the Dark Lord's plans are all in place.

Except for one slave caught in the Dark Lord's gladiator pens.

This player-named slave, and his friends Willy and Amanda, have dreams of escaping from these pens — Willy to meet up with the Gemma Knights, Amanda to see her brother Lester, and the player-named slave just wants freedom — though when the pits end up costing Willy his life, the slave agrees to look for Bogard, last of the knights, for his friend.

Things quickly spiral out of hand, as the newly escaped slave quickly finds himself at the epicenter to prevent the Dark Lord's final victory.

Originally a Gaiden Game on the Game Boy for the pigs-flyingly popular Final Fantasy series, it instead became the first game in the Mana series. This is why there are several elements of the former series (like Chocobos, Moogles, and a standard inventory system) present, while several of the latter (Cannon Travel, Mana Spirits) are absent — many of the latter weren't actually introduced until Secret of Mana, when the series split from the Final Fantasy franchise.

It was eventually remade thrice — the first as Sword of Mana for the Game Boy Advance in 2003 to retroactively remove the Final Fantasy elements and make it more in line with the original game's immediate sequels, and the second in 2006 much more faithfully for mobile phones (but only in Japan). A third remake was released in 2016 for iOS, Android and PlayStation Vita for the series' 25th Anniversary. This 3D version includes minor gameplay updates from Sword of Mana and is retitled Adventures of Mana in Western markets, but is otherwise far closer to the original game, taking fewer liberties than Sword of Mana.