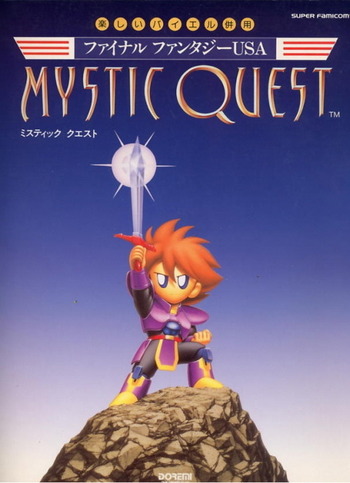 Final Fantasy Mystic Quest (a.k.a. Final Fantasy USA: Mystic Quest in Japan and Mystic Quest Legend in Europe) is an early spinoff of the shin-kickingly popular Final Fantasy franchise, released for the Super NES/Super Famicom in 1992. The game was developed primarily as a way to ease western audiences into the JRPG genre, which at the time was extremely niche to the point of borderline commercial impracticality outside of Japan. As a result, today it's widely considered to be outmoded, laughably easy and hastily-written at best — although it does have a vocal fanbase who cherish it despite those faults.
Advertisement:

The story revolves around Benjamin (you only learn his name from the manual, since he has no default name), a boy chosen by fate to save the world. To do so, he must recover the four magical crystals to restore the world's climate to its proper order. Along the way he will be joined by several allies who have their own reasons for helping him: Kaeli, a young woman who is connected to nature; Tristam, a ninja treasure hunter with his own jazzy musical theme; Phoebe, a mage who joins you to help her grandfather stop an endless winter; and Reuben, a warrior who is searching for his lost father in a volcano. Each will join your party at various times and help you deal with the monsters infesting the land, as well as teach you useful things and give you useful items.

Your goal, of course, is to find the four monsters who have stolen the Crystals and slay them to set things right. But are things really as they seem?

Mystic Quest is considered the red-headed stepchild of the series, and it's still criticized for being too easy and full of cliches that most JRPGs have long-since abandoned. The relative ease proved beneficial to newcomers to the genre, but Final Fantasy IV and VI (along with Squaresoft stablemate Super Mario RPG) ended up becoming the 'gateway drugs' that Mystic Quest might have been. Another reason why the game is so hated is that many mistakenly assumed it was shipped as a replacement for Final Fantasy V, which was never released in its original form in the U.S. Although this is not the case, the two games shared enough visual similarities to raise eyebrows.

That said, the game's music is among the greatest 16-bit soundtracks. Composer Ryuji Sasai also wrote the soundtrack for a much lesser known SquareSoft game, Treasure of the Rudra, as well as Final Fantasy Legend III.

It finally got some acknowledgement in Theatrhythm Final Fantasy: Curtain Call, which includes the regular and boss battle themes and adds Benjamin as a playable character. (This is also the first time Mystic Quest has received any kind of Shout-Out or spinoff inclusion since the original game was released). The original game was also released for the Wii Virtual Console.