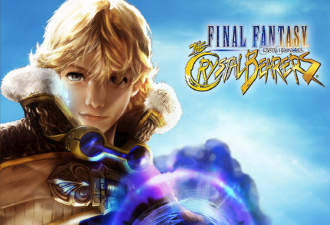 "Leave it to me!"
"Well then... Fun times ahead."
— Layle, summarizing the plot of the game
Advertisement:

Only loosely connected to the other Crystal Chronicles games (as is the norm for the series), Crystal Bearers takes place in a Dungeon Punk world where one of the four "tribes" of the Crystal Chronicles setting — the magically-inclined Yukes — disappeared many years ago. The world is now dominated by the Lilties, living alongside the Clavats, and the Selkies (as ever) tolerated, at best. Magitek pervades the setting, with the ubiquitous crystal reactors powering everything from electric lights to airships. Disrupting this peaceful, ordered life are the eponymous crystal bearers. The last vestiges of true magic in the world, crystal bearers are people with some part of their body made of crystal, giving them the ability to use one particular type of magic. Vastly more powerful than the average person, they're treated with fear and distrust by the general populous.

Enter our protagonist, Layle. A Clavat and a crystal bearer with power over Gravity, he works as a mercenary doing whatever job for whoever pays. While providing security for an airship, he encounters a mysterious Yuke that appears out of a portal in midair. This starts a long series of events that threaten the upheaval of the Lilty-controlled world and worse. Together with his partner, a Selkie named Keiss, and freelance adventurer Belle (another Selkie), Layle has to contend with the Lilty High Commander Jegran, the princess Althea of the Lilty kingdom, and the mysterious Yuke Amidatelion, all of which are pursuing their own goals for their own reasons.

In gameplay terms, Crystal Bearers is primarily an Action-Adventure game with some RPG Elements, compared to the straight-up Action RPG of previous games in the series. Layle uses his gravity powers primarily as a form of Telekinesis, allowing him to grab and lift, drag, throw, or otherwise mess with damn near everything in order to defeat enemies and progress through areas. Also more of a Wide-Open Sandbox than the earlier games' relatively linear dungeons; exploring the world and finding all the random cool stuff to do is half the content of the game. Despite this, the game also has a strong narrative, giving you plenty of reason to continue the story as well as play with all the cool stuff scattered around.