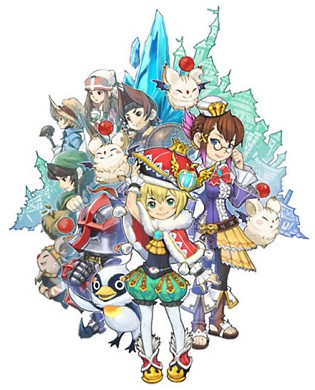 A city-management simulation game spinoff of the lung-collapsingly popular Final Fantasy series set in the Final Fantasy Crystal Chronicles universe, and released as a launch title for Nintendo's WiiWare service in 2008.

You play the role of the son of a king named Epitav, and your search for him leads you to an abandoned castle with a giant crystal and large, empty plots of land. The crystal grants you the power of Architek, a form of magick used to create buildings with mana. Your job (should you choose to accept it) is to repopulate the city and hire townspeople to become soldiers and uncover dungeons in order to find clues to your father's whereabouts.

The king himself doesn't do any fighting... his job is to motivate his soldiers and console their families while they get sent off to fight to preserve the prosperity of the city.

Compare Little King's Story, which has a similar premise (kid becomes the sole monarch of a city/island).

A sequel, Final Fantasy Crystal Chronicles: My Life as a Darklord, was released the following year.

Alternative Title(s): My Life As A King