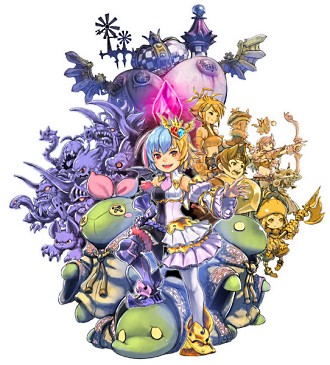 Final Fantasy Crystal Chronicles: My Life as a Darklord is a WiiWare spinoff game of the heart-attack-inducingly popular Final Fantasy series that takes the Tower Defense concept to its logical conclusion. You're put in charge of a sixteen-year-old Darklord-in-training named Mira (the daughter of the main antagonist from this game's predecessor, Final Fantasy Crystal Chronicles: My Life as a King), and you lead her and her monster army in an all-out war against the human race. Being the new Big Bad in town, heroes from all around the world have lined up to attempt to defeat her. Her main goal in each stage is to fortify her tower with strong monsters and artifacts to protect the crystal on top (the crystal contains the remains of her father) against wave after wave of heroes.