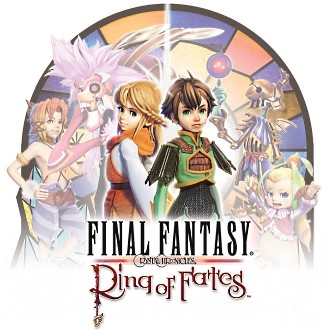 A spinoff of the foot-impalingly popular Final Fantasy franchise, and the first Final Fantasy Crystal Chronicles game for the DS. Unlike the first game, its main mode of play is a story-mode with lots of dialog and pre-made characters. The story follows a pair of Clavat twins named Yuri and Chelinka, whose hometown is attacked and Chelinka falls into a coma. When she awakens, she has lost the ability to speak. Together, they set out on a journey to help Chelinka regain her voice, find their childhood teachers Alhanalem and Meeth, discover why their home was attacked, and learn the purpose of a unique crystal they own. All while trying to stop an ancient prophecy from destroying the world.

There is also a multiplayer mode, which is more like the first game. You create your own character, selecting name, race, and gender, and set off on fetch quests through dungeons you've cleared in solo mode. Also like the first game, you can do this on your own or with nearby friends over the DS's local wireless.