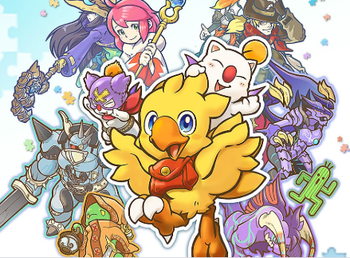 Chocobo's Dungeon is a series of three roguelike games spun off from the ankle-sprainingly popular Final Fantasy series as part of Chunsoft's Mystery Dungeon (Fushigi no Dungeon) franchise. The main character is a Chocobo with only a player-given name, if any. Chocobo adventures through randomly generated dungeons, collecting treasure and saving the world. Just like the mainline games, these take place in seperate continuities: Chocobo meets the same people (including Final Fantasy staples Cid and Mog and a white mage named Shir[o]ma) while living out different stories.