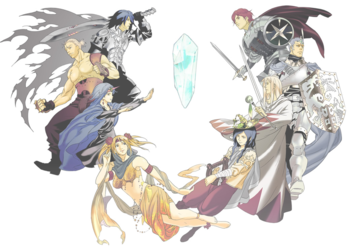 The Warriors of Darkness and Light note (Clockwise, starting from top left) Nacht, Sol, Aigis, Dusk, Sarah, Alba, Diana, Glaive
"In an age long past, the world was suffocating under the crushing grip of war. Only the efforts of the idealistic Avalonian Empire were enough to bring the warm embrace of peace to the land and lead it toward a new age of prosperity."
—Intro
Advertisement:

A new spin-off entry in the cell-phonily popular Final Fantasy series, this game, much like Final Fantasy IV: The After Years, started its development as an Episodic Game meant to be played on mobile phones; however, unlike the former (and unlike Kingdom Hearts coded, just to give another example), its overseas release did not require a remake on another piece of hardware entirely this time around, as the game saw an actual release on mobile phones worldwide, specifically iOS and Android systems alike, on August 31st, 2012.

Strictly speaking about the game, though, the premise is mostly similar to old-school FF games, most notably borrowing from Final Fantasy V and its job system. There are also unlockable jobs, each one of them obtainable after finishing each and every episode. Playable characters are split in two groups, the Warriors of Light and the Warriors of Darkness.

The plot is as follows: Eight youths found themselves separated when the Crystal split the world in two. Now, as the Warriors of Light and the Warriors of Darkness, they travel the separated worlds to find the crystals and fight against The Empire and its mysterious Emperor, helping people and gaining allies on the way.

The game later received a sequel in an all new world with new characters, no job system, and a plot resembling Chrono Trigger called Final Fantasy Dimensions II.