Characters from the iOS and Android game Final Fantasy Dimensions.

The Warriors of Light

The leader of the Warriors of Light, Sol is an apprentice swordsman in the independent Kingdom of Lux. He's an eternal optimist, if a bit of a ditz, and has a dream to ride in the Empire of Avalon's airships one day.

The hero of the Kingdom of Lux, and Diana's older brother. Glaive and Sol are his apprentices. He expects to be recruited by the Imperial forces for his skills.
Sarah aka Princess Sarah of Burtgang

A mysterious girl captured by the Empire and forced to work for them. She appears to have some sort of unknown power.
Dusk

A young, serene, and composed man from Harmonia who was "recruited" by the Empire to do their dirty work. He is Alba's twin brother.

The Warriors of Darkness

A deadly serious young man who is forced to do dirty jobs for the Empire. He was orphaned in the wars of conquest before the game begins.
Alba 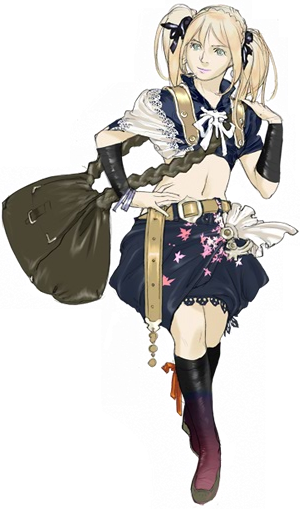 A brash and snarky young woman from Harmonia. She, along with her twin, Dusk, have been "recruited" by the Empire to do dirty work for them.
Diana 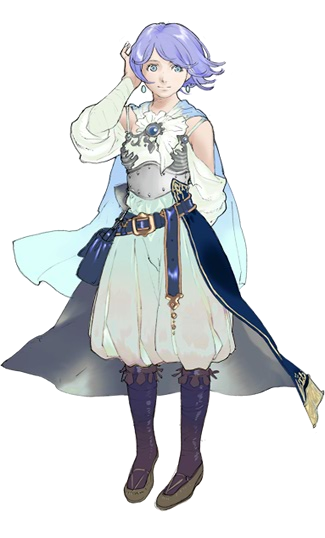 Diana is a kind-spirited young woman from Lux. She is Sol and Glaive's childhood friend, and Aigis's younger sister.
Glaive 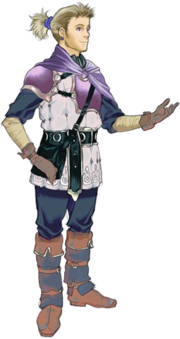 A ponytailed young man from Lux. He is Aigis's apprentice, Sol's rival, and Diana's friend.

A self-proclaimed wandering prophet. He's looking for the rising of the Warriors of Light, so he can help and protect them.

For tropes applying to him post-Reveal as the Emperor, see Elgo's entry under Spoiler Characters. 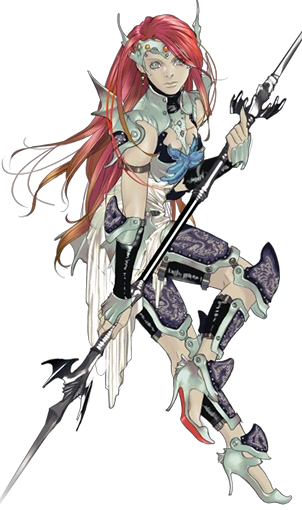 A dragoon who has been raised by dragons and moogles. She is fiercely protective of her "family".
Eduardo

A world-famous bard from the port town of Rusalka. He has fallen in love with a mermaid.
Argy 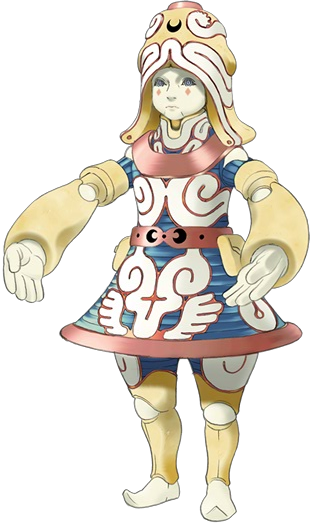 A gynoid created by Dr. Lugae. Although created to be a machine, Lugae viewed her as a daughter and gave her emotions.
Gawain 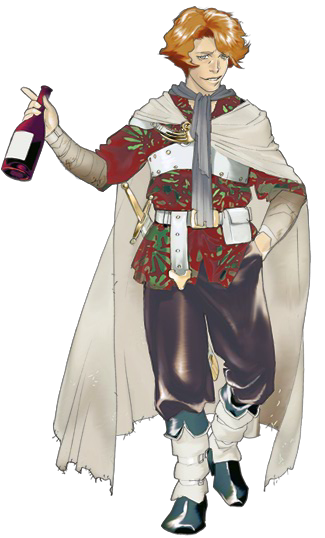 A paladin and the former captain of the guard for the Kingdom of Burtgang. Is currently drinking away the memory of failing to protect the Kingdom and its royal family.
Sophia 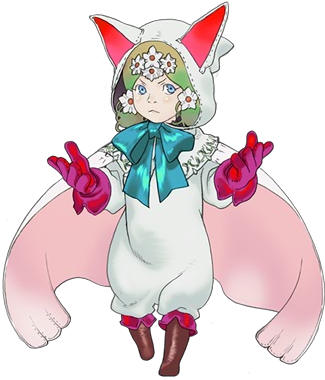 The leader of the magic city Mysidia.

Gramps aka King Feyr of the Elves 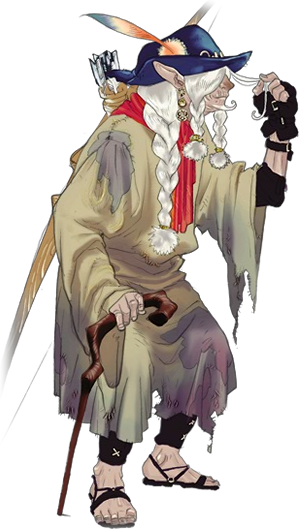 An old blind man living near the Mazewood. Despite his blindness, he is a master archer. And a pervert.
Graham 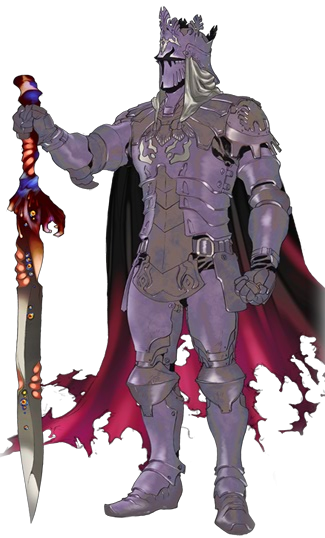 A Dark Knight and the sole survivor of the massacre at Falgabard.
Matoya

An exotic dancer in the desert city of Gardenia. She is the fourth of that name. She is also the leader of Desert Moon.
Jinnai 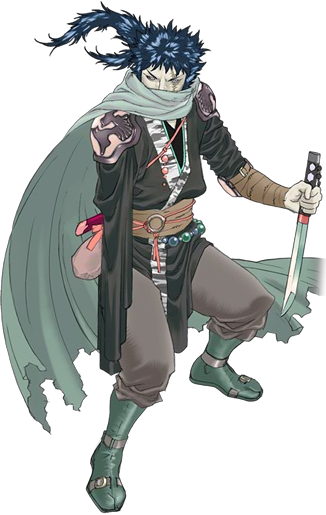 A one-armed ninja and member of the Koga Clan. He was involved in the attack on Burtgang, but chose to leave the Clan after he found out it was done in the name of the Empire.
The Mask 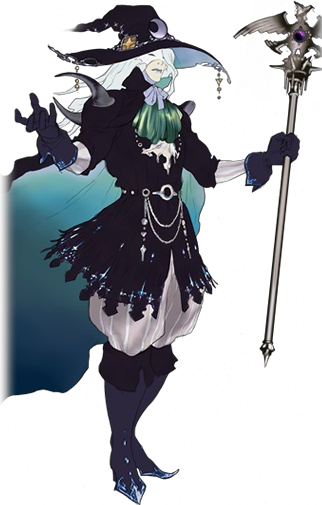 A magus who is seeking the ultimate Black Magic spell. He is watching over Sol and Nacht for some mysterious reason. He is actually Elgo in disguise. Part of Elgo, anyway.

The Pirate King. He and his men have closed off Port Capo on Styx's orders.

Sigurd
A Dark Knight from Falgabard who is renowned as its "hero". He dies during the Empire's assault of Falgabard. He's also Nacht's father.
Tobikage
The adopted son of the Elder of the Fuga Clan, and Jinnai's adopted brother. 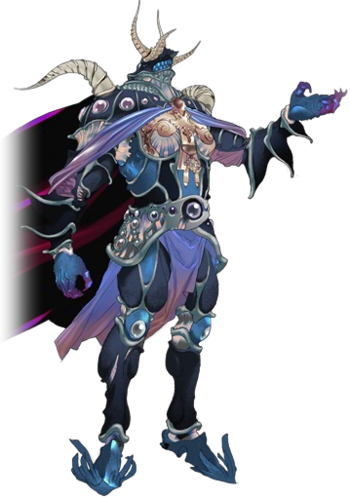 The ruler of the Empire. He has been alive for at least 100 years.

For tropes applying to who's under the armor, see Elgo's entry under Spoiler Characters.

A commander of an airship in the Imperial fleet. It is he that "recruits" Nacht, Alba, Dusk, and Sarah to steal the Lux Crystal.
Dr. Lugae
A Magitek scientist working for the Empire. He is the creator of Argy.
Baugauven of the Flame 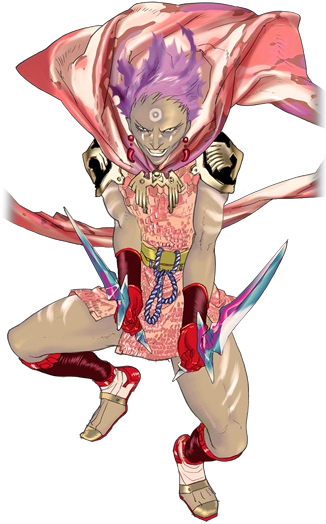 Baugauven, ever cocky and warlike, is known by friend and foes alike as the Explosive Berserker. His command over the Empire's special forces leave no doubt as to the power he wields, and his "Final Backdraft" attack leaves his enemies scorched into lifeless husks.

One of the Empire's four generals. He's extremely vicious and without mercy.

Vata of the Wind 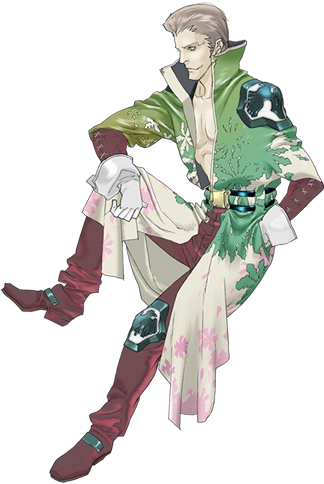 Mercenaries aren't often bound to a higher calling, but Vata is the exception that prove the rule. Brash and unpredictable, he excels at guerrilla warfare.

One of the Empire's four generals. He's headstrong and ruthless. He later manages to steal the Dragoon job that was meant for the Light Warriors only, and turns its powers against them. 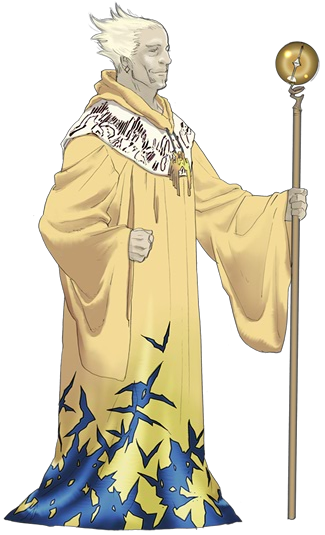 Don't be fooled by his composed demeanor—Asmodai is a vicious villain who has long abandoned mercy and compassion. Subterfuge and espionage are his weapons of choice, but when forced into direct combat, he commands powerful miasmas drawn forth from the earth that rots whatever he treads.
One of the Empire's four generals. He is impersonating King Feyr. He is a firm believer in prophecies.
Styx of the Water 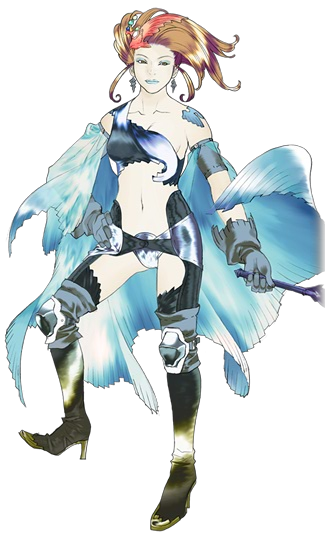 The lone female member of the four Generals, Styx the Witch is a cunning enchantress with a penchant for popping up unexpectedly. Her dominion over the forces of water enable her to manipulate liquid as she sees fit, and she uses its glassy reflection to conceal her true form.
One of the Empire's four generals. She is a witch who relies on trickery and traps.
Shango of the Lightning 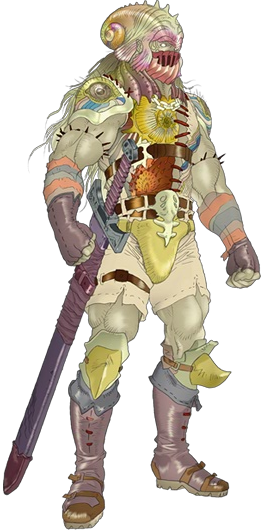 Master of lightning, Shango commands powers of which the four generals can barely conceive. A giant among men, he stands more than ten feet tall, his imposing figure striking fear in all he faces. His sword techniques are far above and beyond those of the other divine generals.
One of the four Divine Generals of the Empire, with the power of lightning.
Cocytus of the Ice 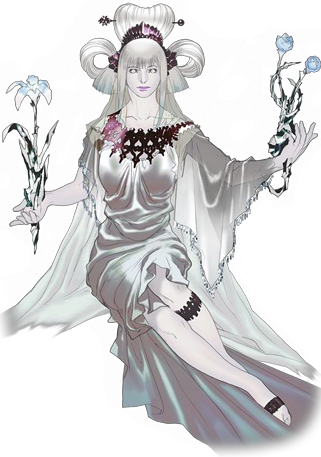 Cocytus is the divine general who commands the bone-shattering forces of ice. It is only fitting, than, that her expression is cold and her attitude frigid, with emotion being something she knows only the weak possess.
One of the four Divine Generals, with the power of ice.
Imperio of the Light 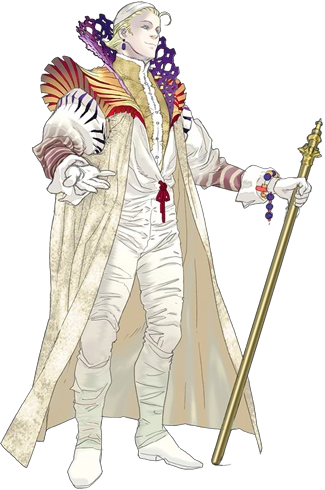 Imperio, right hand man of the Emperor, serves as the unofficial leader of the other three divine generals. In comparison with the violent Shango and the icy Cocytus, he is dignified and refined, with a slight smile always gracing his lips.
One of the four Divine Generals, with the power of light. He seems to have the position of the Emperor's right hand.
Gehenna of the Darkness

None in Avalon have a darker personality than Gehenna, he who wields black magic as deftly as a child playing with her doll. Yet his existence may be nothing more than rumor, as even throughout the Empire none are said to have seen his form...
One of the four Divine Generals, with the power of darkness. A total enigma; it is said that nobody has ever seen him, save for the emperor.

While not characters, these jobs add characterization tropes to the two groups of Warriors.

Jobs common to both groups:

Freelancer
The base job class for the heroes, although not for any of the Guest Star Party Members. It can equip any weapon or armor and has four slots for class skills.
Warrior
A class that specializes in physical attacks. Can equip nearly all of the melee weapons plus bows.
Monk
A martial arts specialist class. Equips claws.
Thief
A speedy class that can steal from enemies. Also has an ability to increase item drop rate. Equips daggers, katanas, bows, and boomerangs.
Red Mage
A Jack-of-All-Trades class that generalizes in physical attacks and black and white magic, but specializes in nothing.
White Mage
A class specializing in healing and status buffs.
Black Mage
A class specializing in offensive magic and negative status ailments.
Summoner
A class that summons Eidolons for powerful magic damage.

Jobs only available to the Light Warriors:

Dragoon
A heavily armored class that utilizes the series' signature Jump move. It also has access to breath attacks that hit all enemies.
Bard
A class that relies on the magic of music for attacking.
Memorist
Memorists can use all abilities known by the character, but there is a catch. Using the Memorandum ability replaces all of a character's battle commands with those randomly chosen from commands they know.
Paladin
A heavily armored class that uses class specific holy swords, holy sword abilities, and white magic.
Seer

Jobs available only to the Dark Warriors:

Ranger
Master archers who rely on speed.
Dark Knight
An armored melee class that uses the class-specific dark swords.
Dancer
A class that relies on magic dances to heal the party or debuff enemies.
Ninja
Magus 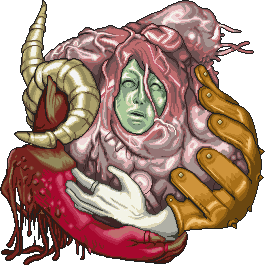 Chaos Elgo
"An emperor must be the absolute symbol of the land, feared by one and all. The position exists beyond the realm of age and death, like a god among mortals. My people have always been ruled by an emperor since time immemorial. But I hungered for more than temporal power. I wanted the strength of the Crystals to defy death itself and reign until the very end of days!"
—Elgo, revealing his goals to the heroes.

Elgo was never what he appeared, being the true Big Bad. He is actually the Emperor, and he seeks to use the power of the crystals to become a god and cheat death. The crystals themselves sense this and attempt to keep him from gaining them all, and by game's end he is almost successful...that is, until he loses his control over the Nil and is absorbed, becoming Chaos Elgo.

The Nil
An ancient power of nothingness residing within the Void, or perhaps the Void itself. This incarnation of the Void is unique in that the concept itself seems to be sentient, as well as malignant, therefore giving it the traits of a character. In it's great bid to return everything to non-existence, the Nil created a host of powerful monsters known as the Armies of Nil, led by the Blades of Nil (Suffering, Despair, Anguish and Misery). It used Elgo to further it's omnicidal designs, giving him power in exchange for an opportunity to manifest in the wolds of light and dark. It is the source of the Dark Flows, which are similar to portals and lead to various areas of the Void. It is fought directly twice, once when Vata sacrifices himself by forcing the Nil to use him as a host and is defeated in battle, and the second time as the Final Boss, Chaos Elgo, where it manifests enough of it's power to nearly kill the party.