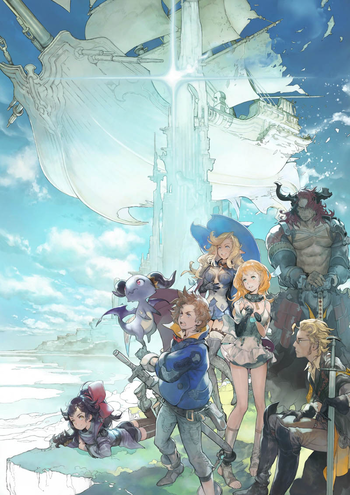 Another mobile spinoff entry in the forehead slappingly popular Final Fantasy series, this one a loose sequel to its predecessor, Final Fantasy Dimensions. Released in Japan for Android and iOS on February 12, 2015 and worldwide November 1, 2017, it was originally created as an online gacha game; however, online service ended in late 2017 and it can now be played as a fully offline entry with no additional costs or gacha elements.

The game can best be described as "Final Fantasy meets Chrono Trigger", in that it has plenty of mythology gags and references to the Final Fantasy series but the plot echoes the Time Travel shenanigans shown in Chrono Trigger. (director Takashi Tokita, also responsible for Trigger, downright admitted

The story follows a young man named Morrow, dissatisfied with his island life on the secluded Navos Village in the center of the world. One day, a meteor flashes across the sky and lands in the forest outside of his village, and when he goes to investigate he comes across a baby dragon he decides to name Mootie and a mysterious Emotionless Girl in strange clothes who emerged from the meteor. The girl, Aemo, soon reveals that she has Laser-Guided Amnesia, but they eventually learn that she has come from the future, sent to the present day to stop the events that lead to the Day of Reckoning and destroy the world. The three of them then begin a journey across time in order to find the beings of Chaos attacking the fabric of history. Along the way, they pick up a number of allies: Wrieg, a famous adventurer from the present day that Morrow looks up to; Jornee, an elf princess from the Middle Ages; Parai, a lone wolf and half dwarf from the Middle Ages; and Maina, a modern-day descendant of a ninja clan. The story is divided into chapters as the party traverses through different time periods.

Gameplay emulates the Conditional Time Battle system of Final Fantasy X, as the player travels across different nodes and battles waves of enemies. Abilities and spells are learned by equipping signets - stones that hold the power of numerous Eidolons. Each character can obtain specific signets unique to them that allow them to learn and master the abilities within, and many are aligned to each character's elemental affinity. Though characters can only equip four signets at a time, mastering the signets allows them to use the abilities permanently. In addition to learning abilities, signets allow the characters to summon the Eidolon within for a powerful ability.

The main storyline has seven chapters, but there is also a sort of Post-Script Season in the form of the three chapter Eureka arc.