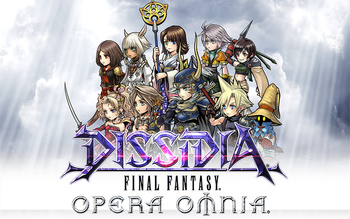 Your will to protect the world will give our heroes strength when they need it most.
Advertisement:

The game is set in a parallel world created by the Crystal to serve as resting ground for heroes and villains from various Final Fantasy games summoned by Materia and Spiritus to serve as their champions, now under threat from "Torsions", distortions in time and space which bring fearsome monsters. The champions are forced to fight anew, even set aside differences, to protect their secondary homeland.

Opera Omnia continues its evolution of the systems instituted in the original Dissidia Final Fantasy, which was an interesting hybrid of Fighting Game and RPG Elements. Team Ninja have made the decision to just split them in two: where NT focuses primarily on the fighting aspects, OO is a straight RPG featuring a single-player campaign, Turn-Based Combat, a three-character party, and the "Conditional Turn-Based" / "Command Time Battle" / "Count Time Battle" system from Final Fantasy X which utilizes a Combatant Cooldown System and Visual Initiative Queue.

Battle, as always for Dissidia, revolves around "Bravery Points," AKA the Break Meter. Characters execute BRV Attacks to transfer BRV points from an enemy to themselves, and then use HP Attacks to deal Hit Point damage, which is equal to the amount of BRV they currently have and consumes all that BRV. Any character who is at BRV 0 and then has a BRV Attack applied to them is put in a "Break" state, which delays their next turn and delivers a BRV bonus to the entire opposing party; fortunately, all characters regenerate a small amount of BRV at the beginning of their turn. Characters can also equip a variety of unlockable magic and Signature Moves, though every character has a unique list. The resulting system is surprisingly deep; while Level Grinding will of course carry the day, players can also bait the opposition into throwing HP attacks early and leaving themselves vulnerable to BRV Break, all whilst negotiating the intricacies of their own characters and their varying Starting BRV / Max BRV / BRV gain rates.

Out of battle, the game features a hexagon-based navigable map and allows players to recruit many characters, some through events and others via the single-player campaign. It is scaffolded by the traditional free-to-pay microtransactions functions, which allow players to get their hands on equipment for use and upgrading. Players may also unlock Summon Magic and bring one into battle for once-per-battle use. Finally, in addition to the famous music of Final Fantasy, there is also an (extremely) limited amount of voice acting.

Playable Characters
Note: Names in italic denote characters which are, as of June 2022, still Japan-exclusive.
Other Characters

Opera Omnia can be found on the iOS Games and Android Games portal of your choice.