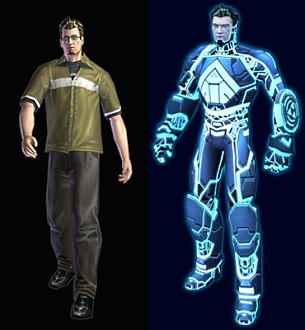 When your technology isn't just bleeding-edge, but laser-edged, disruption-fielded-with-motorized-teeth high-tech. Power Glows, and now so does your tech. A common design scheme used for this glow is a series of lines along the edges or between panels of the machine. Others will have flat surfaces crossed by circuit-like lines that glow when activated, or have occasional pulses of light race down their length in tandem. Others have glowing components such as engines, weapon barrels, forcefield projectors and the like.

"Tron Lines" are strongly influenced from the wireframe graphics

used in early video games, especially as it appeared in Atari's "Quadrascan Display"-based games such as Tempest, Battlezone and Asteroids. As 3D modeling transitioned from empty frames to solid polygons, the edges were still rendered, ergo, "Tron Lines".

If this were to take place in a world using technology similar to ours, this would be pretty inefficient. A big waste of power to maintain the glow (assuming this was electricity and not some power source that glowed on its own), and impossible to conceal, but damn, it looks cool. In harder SF, this trope is usually justified by the use of Fiber-optics

. When your tech uses this, Hard Light systems and Holographic Terminals are pretty much prerequisites.

Of course, Tron Lines are Color-Coded for Your Convenience. Usually blue is "good" or at least standard; if they turn red or purple the A.I. Is a Crapshoot or else has been taken over by some virus or hacker. A new or unique color can indicate a new level of power or a unique function. The lines get fainter or even turn off the closer the person or device is to deactivation. Likewise any power-up usually results in brighter lines; pushing this to the limit causes every line to have a fan of light shining out.

The ultimate expression of Shiny-Looking Spaceships. See also Instant Runes, essentially the Magic version, and Volcanic Veins, an organic equivalent seen among Elemental Embodiments. If you do this to a whole urban environment, it counts as a Neon City. Equipping your car or computer with neons and strobes counts as Truth in Television to some degree, though it's well known these things need their own power supply to get them running.