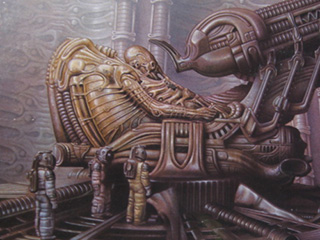 One relic they always leave behind is a sense of wonder.
"They left our planets long ago
The Elder Race still learn and grow
Their power grows with purpose strong
To claim the home where they belong."
— Rush, "2112"
Advertisement:

Precursors, a.k.a. "Ancients", "Elders" or "Old Ones", are a standard of Science Fiction (especially Space Opera), Fantasy and occasionally Horror: an ancient race whose culture and knowledge rose to its pinnacle in ages long past but which is no longer present.

Predecessors now leave behind nothing but tantalizing ruins and rare, sometimes incomprehensible artifacts and dangerous weapons. (Any of the aforementioned sorts of relics may be a Big Dumb Object.) Just why, no one knows. Perhaps they Ascended to a Higher Plane of Existence, succumbed to decadence or were wiped out by a disaster or war, or maybe they just relocated en masse to somewhere else where they haven't been found yet.