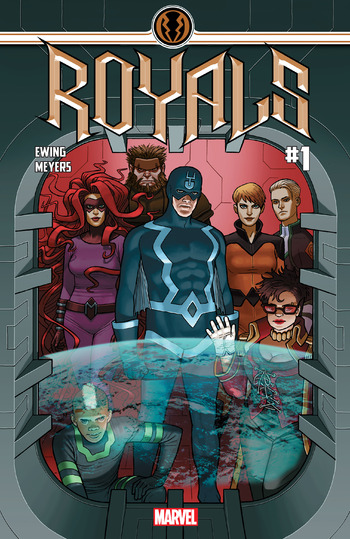 And we'll always be royals...
"And I alone am left to tell it. To tell of the Seven who sought the Secret. Of the Odyssey. Seven went forth...

Royals is an series published by Marvel Comics starring The Inhumans. It is written by Al Ewing and illustrated by Jonboy Meyers. It is part of the ResurrXion relaunch.

In the aftermath of Inhumans vs. X-Men, the Inhumans have undergone a massive shift. Queen Medusa has relinquished the royal throne, and Maximus the Mad has been imprisoned, but there's still a problem: with the Terrigen cloud destroyed, the Inhumans will no longer be able to use it to give themselves superpowers. Unless, of course, a good-looking, gunslinging Kree from an alternate dimension (Marvel Boy) just happens to know some secrets about Terrigen that even the Inhumans didn't, hidden somewhere out there in the universe. Of course, even if there were a group of superpowered beings up for an intergalactic road-trip, there's still dangers.

And 5,000 years in the future, the Last Inhuman recounts the story of the seven who sought the secret...but only six returned.

The series ended after twelve issues, with the plot being wrapped up in the one-shot, Inhumans: Judgement Day.