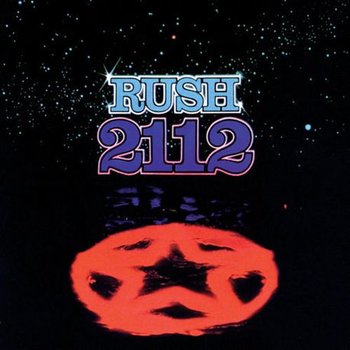 "Listen to my music/And hear what it can do/There's something here as strong as life/I know that it will reach you..."
Advertisement:

2112 is the fourth studio album by the Canadian Progressive Rock band Rush, released in 1976. The album counts as the band's Breakthrough Hit, and saved the band's record contract at a point during which they were in danger of getting dropped from their label. The record label had asked the band to move in a more commercially friendly and accessible direction, but Rush disregarded this request and constructed the album around the twenty-minute Title Track, a Science Fiction Rock Opera about a dystopian future. "2112" has since become one of Rush's Signature Songs, and the album is considered the point where Rush grew the beard.

The album is sometimes called a Concept Album, but only the first side really qualifies. Lyricist Neil Peart began writing lyrics for the title suite without any specific inspiration in mind, but upon finishing it, noted that it had substantial similarities to Ayn Rand's novella Anthem. This prompted him to add a note that Rand had inspired the piece in the original liner notes to the album, since he did not want to plagiarise. This eventually became a case of Never Live It Down, particularly after Peart's political leanings grew more distant from Rand's. Peart eventually removed the note in reissues of the album.

The album has been well received overall and remains one of Rush's most popular and well-liked albums among fans. The title track is particularly popular, while "A Passage to Bangkok" and "Something for Nothing" remain other fan favourites.

We are the tropes of the temples of Syrinx