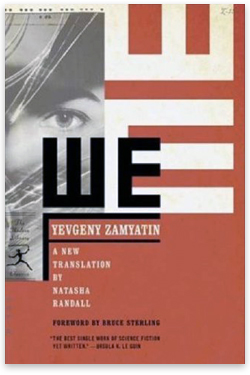 One of many equally bleak covers.
And I'm convinced that in the end we will prevail. Because Reason must prevail.
Advertisement:

One of the earliest known Dystopia novels, written by Yevgeny Zamyatin in 1921 and predating Brave New World (1932), Anthem (1938) and 1984 (1949), which it directly inspired. It's also notable for being the first work banned by Goskomizdat, not published in the Soviet Union until 1988, and some part of the description of the One State read as frighteningly similar to Stalinism — eight years before it began to take shape. (The Soviets especially didn't like the book's implication that theirs was not the final, destined-for-success revolution.)

The entire book is a fictional diary written by the protagonist, D-503, a citizen of the totalitarian One State. (Literally in Russian: "United State", "Unified State" or "Wholesome State".) It's ruled by a Big Brother-like figure known as the Benefactor. People are called "numbers" and lead a highly math- and logic-centered existence. Everything is arranged via rigid timetables, down to sex — and because sex is brought down to a purely logical activity, Eternal Sexual Freedom is the norm. "Every number", the Benefactor states, "belongs to every other number", and monogamy and irrational love are strongly discouraged as a result.

D-503 regularly has sex with O-90, a very sweet woman who delights in his presence. He shares her with his best friend, the state poet R-13. One day, D-503 is approached by another woman: I-330, a member of La Résistance called the Mephi, whom he falls madly in love with. He starts to realize that his sexual and intellectual connection to O-90 is dwindling quickly. And when R-13 starts secretly meeting the mysterious I-330 as well, D-503 begins to feel something he's never experienced before: jealousy, emotional love, a desire for monogamy and privacy, and a yearning for the unknown.

Eight months after reading We, George Orwell sat down and started writing 1984 as a direct cultural translation of the story. Both Orwell and Kurt Vonnegut (who based Player Piano on We) have accused Aldous Huxley of stealing the plot of We for Brave New World, although Huxley always denied it. Ayn Rand's Anthem is uncannily similar to We. Last but not least, We heavily influenced Equilibrium in all its campy glory, so much that it could very well be considered an over-the-top We: The Movie.

Zamyatin himself was, in turn, influenced primarily by H. G. Wells, whose works he had previously edited in Russian.

The German TV network ZDF adapted the novel for a TV movie under the German title Wir in 1982. It would later a get a Russian big screen adaptation in 2021.

We contains examples of: