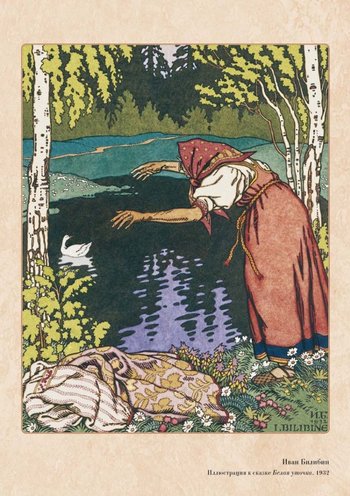 The Duck and the Witch
Advertisement:

"The White Duck" is a Russian fairy tale collected by Alexander Afanasyev in Narodnye Russkie Skazki. It was included by Andrew Lang in The Yellow Fairy Book.

The plot of the tale follows a king who leaves his new wife for a journey, warning her to be careful in his absence. A woman lures her into the garden and into a pool, and turns her into a white duck, taking the queen's own form and place, the king returning to the impostor. The duck soon laid three eggs, two ducklings and an ugly drake born of them; the duck warns the three of the witch and to avoid her.

One day the witch managed to lure the three inside; however, she waited for the ducklings to fall asleep before slaying them. The drake escaped, having stayed awake. The white duck found the bodies and lamented the deaths and the king discovered it, the duck returning to the form of a woman in his presence.

The returned queen tells the king of what had happened and he seeks out magical aid, using magical water to revive the killed ducklings and turn them and the drake into three human children. The witch is then condemned by the king and executed by dismemberment.

"The White Duck" contains examples of: