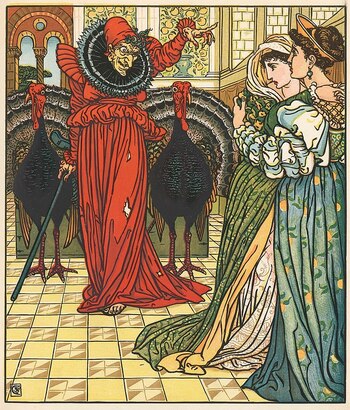 The Yellow Dwarf is a literary Fairy Tale by Madame d'Aulnoy, published in Les Contes des Fées in 1697. Andrew Lang translated the story into English and included it in The Blue Fairy Book. Lang's version of the story can be read here

, and another translation by Anne Thackeray Ritchie can be read here

Once upon a time lived a queen and her beautiful daughter, Toutebelle (French for "All-Beauty"). However, as the princess grew older, her mother began to worry that her daughter was unmarried, so she seeks the Fairy of the Desert for advice. The Fairy lives in a cave guarded by monstrous two-headed lions, so the queen brings cakes the distract the beasts. However, when she arrives, she finds that the cakes have vanished.

Suddenly, a yellow dwarf appears and offers to save the queen from the lions in exchange for Toutebelle's hand in marriage. Desperate, the queen agrees, but regrets it soon after and literally worries herself sick when she arrives home.

Hoping to help her mother, Toutebelle visits the same fairy. Once again, the cakes vanish, the dwarf appears, and in desperation, Toutebelle agrees to the dwarf's deal in order to stay alive. She is teleported home, the only reminder of her ordeal being a red ring made out of a strand of hair on her finger.

The ordeal with the dwarf persuades Toutebelle to find a husband who can protect her from magic and danger. She chooses the King of the Gold Mines, a kind and generous ruler. But on the wedding day, the Fairy of the Desert and the Yellow Dwarf both show up, demanding that Toutebelle and her mother honor the marriage-promise made to the dwarf. The Dwarf and the King duel for Toutebelle. The dwarf wins when the Fairy stabs Toutebelle, distracting the king. The dwarf claims his prize, and the Fairy, enamored with the gallant king, abducts him as well.

The Fairy tries to seduce the king, but he remains faithful to the princess as he tries in vain to come up with a plan to escape the fairy and rescue Toutebelle. One fateful day, he meets a mermaid who has swam around the world, meeting Toutebelle and her mother. Disgusted by the fairy and dwarf's actions, she offers to help reunite the lovers.

Using her magic, the mermaid creates an effigy of the king to trick the fairy into thinking he has drowned, and swims him to the dwarf's steel castle, where he's imprisoned Toutebelle and many other beautiful women. The mermaid explains that Toutebelle has been tricked into thinking that the King actually did fall in love with the fairy, and arms him with a magical sword made out of a giant diamond to fight the dwarf's monsters.

The King defeats four sphinxes, six dragons, and 24 nymphs to find Toutebelle. He affirms his fidelity to her, but as he is on his knees, he drops the magical sword, allowing the dwarf to appear and grab it. He tells Toutebelle that he will let her beloved live if she agrees to marry him, and the lovers bicker over who should die to save whom. Annoyed, the dwarf simply stabs the king, and the princess dies of grief right there.

The mermaid finds their bodies and, while she cannot undo their sad fate, she uses her magic to change them into palm trees. "The two perfect bodies became two beautiful trees, bearing ever a faithful love one to the other, embracing each other with their intertwined branches, and in this tender union immortalizing their loves."

"The Yellow Dwarf" includes examples of: