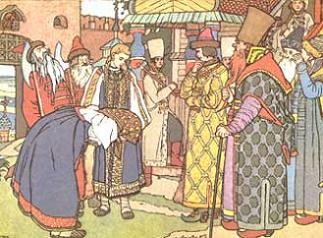 Vasilissa is the youngest, and a stepdaughter, and her stepmother and stepsisters set her tasks she manages with her mother's blessing and the doll her dead mother gave her. When she comes of age, all the young men wish to marry her, rather than her older stepsisters, which the stepmother forbids. Finally, having sent her into the woods many times in hopes that Baba Yaga would eat her, she has her sent directly to the witch to get fire after they had deliberately quenched all their fires.

She finds her in a hut set on chicken legs, surrounded by skulls on posts that glow at night. Baba Yaga sets her Impossible Tasks, but when she finds out that Vasilissa succeeds with the help of her mother's blessing, she evicts her, giving her a lantern made from a skull for fire, because no one with a blessing can stay with her.

Vasilissa found shelter with an old woman and began to spin flax and weave the thread. When the old woman brought it to market, she brought to the Tsar, who could not find seamstresses capable of sewing it. It was brought back to Vasilissa, who could. Whereupon the Tsar insisted on seeing her, fell in love, and married her.

Full text can be read here

. Some editions have been illustrated by Ivan Bilibin

Received a comic adaptation by Archaia Entertainment in 2014 from an unproduced script of The Storyteller.

Vasilissa the Beautiful provides examples of the following tropes: