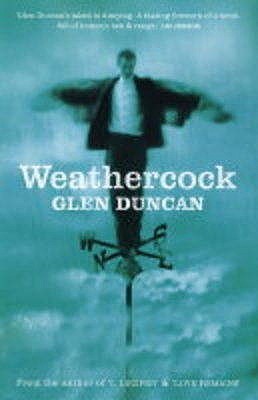 By a Papal enactment made in the middle of the 9th century, the figure of a cock was set up on every church steeple as the emblem of St Peter. The emblem is an allusion to his denial of our Lord thrice before the cock crew twice . . . A person who is always changing his mind is, figuratively, a weathercock.

— Brewer's Concise Dictionary of Phrase & Fablenote an epigraph from the novel

Weathercock, published in 2003, is the fourth novel by British author Glen Duncan. A bildungsroman of sorts, it follows protagonist Dominic Hood as he matures from young boy to just-about-middle-aged, wrestling with his inner demons along the way. The problem with Dominic is that his inner demons aren't entirely figurative. At least, he doesn't think so. He's not entirely sure.

The Roman Catholic Hood grows up with an awareness that he's not like other people – things that horrify others only turn him on. This is, to put it bluntly, a novel about sex. Faith, love and friendship war with despair, evil and nihilism across the battleground of Dominic's fixation with his own sexual depravity, from Manchester to Manhattan by way of London and Goa. He is torn between keeping the faith, as Badass Preacher Father Ignatius Malone exhorts him to do, and indulging his most horrific desires – a position embodied by the seductive Deborah Black.

Dominic is writing down the story of his life so far for reasons including, but not limited to, the chance of a new life and love with the miserably mysterious Holly and the recent and inexplicable visitations of the ghost of his dead best friend.