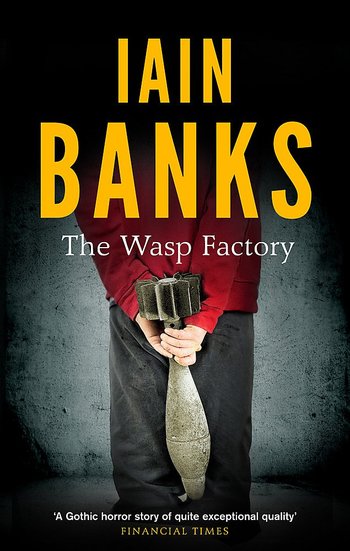 Two years after I killed Blyth I murdered my young brother Paul, for quite different and more fundamental reasons than I'd disposed of Blyth, and then a year after that I did for my young cousin Esmerelda, more or less on a whim.

That's my score to date. Three. I haven't killed anybody for years, and don't intend to ever again.

It was just a stage I was going through.
Advertisement:

The Wasp Factory is a 1984 novel written by Iain Banks. It tells the story of Frank Cauldhame, your average sixteen year-old murdererous sociopath who lives with his highly secretive father on an isolated island in North East Scotland. Frank's daily routine consists of disturbing shamanistic rituals, which include brutal animal sacrifice, that he believes give him control over the island. In addition to this he has also murdered three members of his family.

Frank's horrific and insular world is disrupted when he begins receiving calls from his older brother Eric who has escaped from his mental institution. As Frank begins to relate the circumstances which led to his brother's breakdown, he also begins to dig deeper into his father's secrets, leading to several deeply unpleasant revelations...