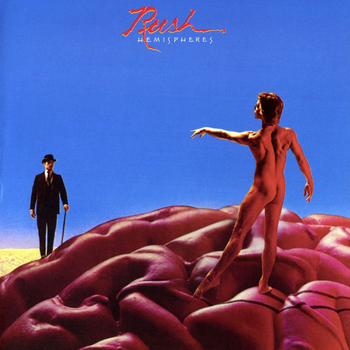 "We can walk our road together if our goals are all the same/We can run alone and free if we pursue a different aim/Let the truth of love be lighted, let the love of truth shine clear/Sensibility, armed with sense and liberty/With the heart and mind united in a single perfect sphere..."
Advertisement:

Hemispheres is the sixth studio album by Canadian Progressive Rock band Rush, released in 1978. Like the band's previous albums Caress of Steel and 2112, half the album is given over to a side-length Rock Opera, in this case "Cygnus X-1 Book II: Hemispheres", the Sequel Song to the previous album's "Cygnus X-1 Book I: The Voyage". The album has fewer songs than any other Rush album, with half the album's other side devoted to the lengthy instrumental "La villa strangiato". According to Peart, they took more time recording this song than they took recording the entire Fly by Night album. The other songs on the album, "Circumstances" and "The Trees", are more conventional. The latter is a case of What Do You Mean, It's Not Political?; many listeners assume that the song is an allegory about socialism or some other issue, but Peart insists that it was inspired by a comic he saw about trees arguing and that no Aesop was intended.

"The Trees" aside, this album arguably reflects a major shift in Peart's worldview, as the sort-of Title Track argues that a balanced worldview requires both reason and love for others. The latter of these would have been anathema to Ayn Rand, who had been a major influence on Peart's early lyrics, and who wrote essays with titles like "The Virtue of Selfishness". According to Peart himself, the shift in his worldview, perhaps surprisingly, came out of cynicism. His idealism led him to believe it was possible to base a functional society around self-interest, but as he came to see that Humans Are Flawed, he became convinced that this wouldn't work, and his politics and worldview shifted as a result. The Title Track, despite being allegorical science fiction, can therefore be taken as almost autobiographical in this sense, as it depicts a society learning the hard way that neither cold-hearted rationalism nor mindless selflessness can create a functional society: one needs both reason and love to create a fulfilling life.

The album was well received by critics and remains well liked by fans, many of whom consider it one of the band's best albums, if not their best. However, while commercially successful, it was less so than some of the band's preceding albums, which may have been one factor that prompted them to change their focus towards shorter compositions on Permanent Waves. As for the band themselves, Geddy Lee in particular wasn't thrilled with some of the keys he found himself forced to sing in (he noted that he and Alex had written the music without devoting much thought to the fact that someone would have to sing it), and he had felt the band's lengthy songs were becoming a bit formulaic. This was the last album where he sang in such a high register, and it was also the last album with a side-length epic. Peart would also start addressing real-world topics more directly on the band's Eighties material and moving forward. This album is thus, in many respects, the end of an era for the band; the dividing line between the band's Seventies and Eighties material is pretty distinct.

And The Tropes That Are All Kept Equal